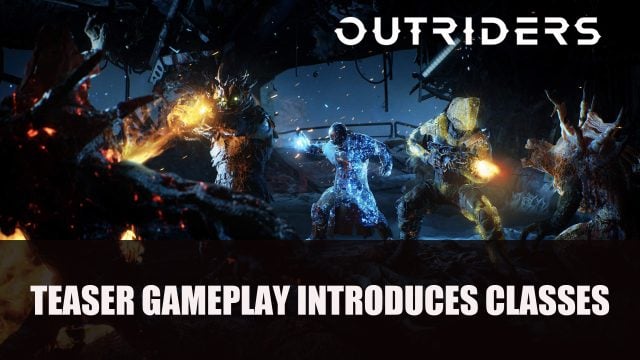 Outriders is one of the confirmed titles that is slated for the next-gen consoles PS5 and Xbox Series X, that are arriving in Holiday 2020. The developer People Can Fly have shared some new teaser clips showing off some of the in-game character classes. There are 3 classes in total so far revealed Pyromancer, the Trickster and The Devastator. Each wield their special powers along with shooter and melee action.

People Can Fly has shared some of the abilities that the Trickster class possesses, including Slow Trap, a way to slow down groups of enemies. Also Temporal Slice, allowing you to devastatingly cut down your enemies with an explosive X-ray outcome.

As a Trickster, you can use your Slow Trap ability in a number of ways, such as slowing down enemies to avoid being swarmed! #Outriders pic.twitter.com/oqZE4TD1F3

As a Trickster, use your Temporal Slice to cut through all adversaries you encounter with explosive, X-ray results. #Outriders pic.twitter.com/dhRMs0wkHn

For the class Devastator, there is the ability to impale enemies by summoning stone spikes from the ground, dealing some mighty damage.

As a Devastator, impale your enemies by conjuring stone spikes from the ground itself. #Outriders pic.twitter.com/4tmLSwfM7s

The developer also shared a Jump-slam melee attack which can be activated even while sprinting, providing movement and dealing damage when needed.

Jump-slam into battle by activating your melee attack whilst sprinting. #Outriders pic.twitter.com/rsJz0zJaJ9

As People Can Fly reveals more gameplay for the upcoming action shooter soon. Hopefully we will get to see more from each class including Pyromancer.

Outriders has been in development since 2015, an RPG shooter that takes players to the planet of Enoch as a “last chance”, where humanity plans to colonise after Earth becomes inhabitable. Described as a drop-in-drop-out co-op according to its Steam page.

Outriders is expected to release in the Holiday 2020 for PS4, PS5, Xbox One and Xbox Series X and PC via the Epic Games Store.

For more news be sure to read next Monster Hunter World: Iceborne Expansion Title Update 3.5 Details and Digimon Survive Still On Track For 2020.