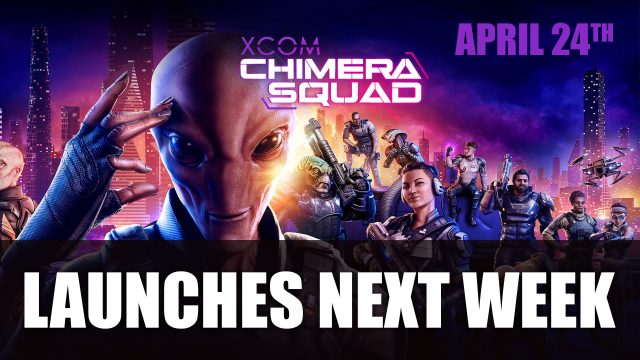 Firaxis have announced a new standalone title XCOM: Chimera Squad will be releasing as soon as next week.

XCOM: Chimera Squad Gets Surprise Release Date of Next Week

The new title by developer Firaxis, XCOM Chimera Squad is set five years after the events of XCOM 2, where aliens inhabit the Earth and it’s up to you to gather a resistance to take back it back. In Chimera however, things have changed dramatically. Humans and aliens once at war with one another, now live together in an uneasy truce. You now run a police unit of humans, aliens and even hybrids known as the Chimera Squad.

There are definitely some big differences with this entry of XCOM, including the addition of interlacing turns. In Chimera Squad, turns will focus on a more Dungeons & Dragon’s style of game format, where turns will alternate with each character, rather than each side taking it’s own turn. There is also no permadeath which has appeared in previous XCOM titles. Instead, team members that get critically injured will gain a stat debuff.

XCOM Chimera Squad offers a turn-based tactical combat experience in the XCOM universe. Outside of combat you will manage a high-tech HQ, organise tasks, investigations and agent assignments against a ticking clock to keep anarchy at bay. Each agent has their own unique story, skills and motivations.

Official features can be found below and the reveal trailer:

For more news find it here in Remnant From The Ashes DLC Swamp Of Corsus Releases April 28th and Hellpoint Delayed To Q2 2020.