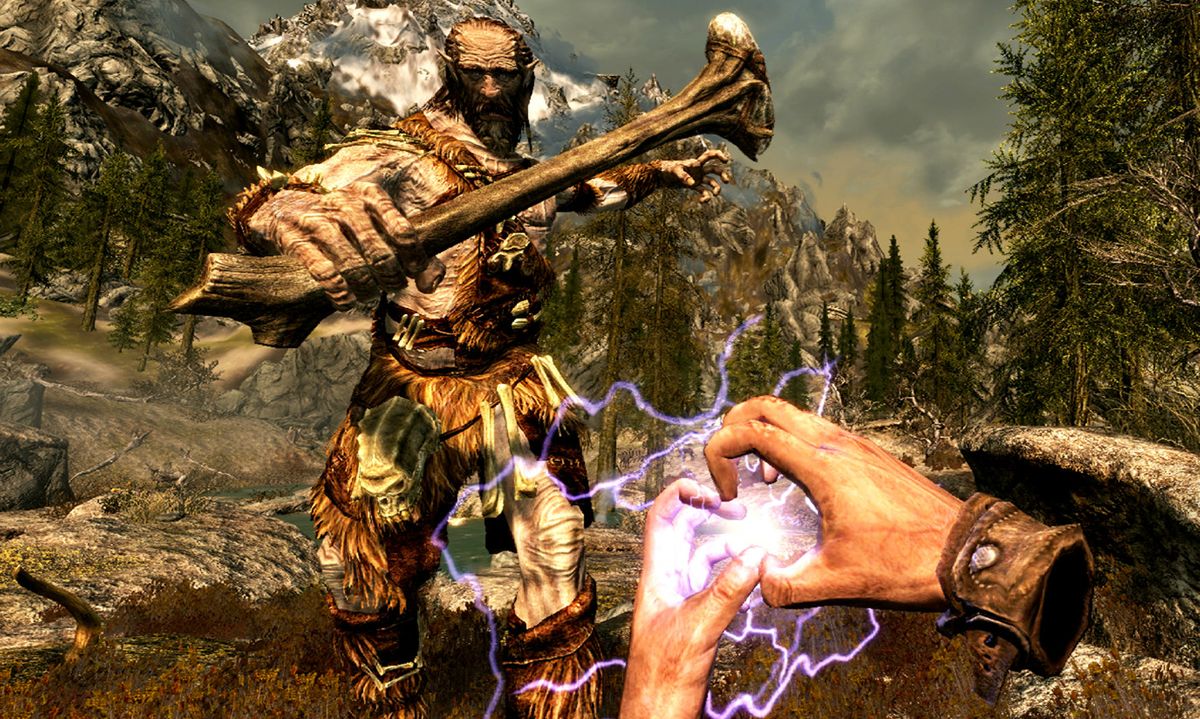 For decades, scientists and researchers have been working on creating brain-computer and brain-machine interfaces. In a nutshell (which I cracked by reading a few paragraphs of an extremely long article on Wikipedia), our brain uses electrical impulses that can be detected, measured and, in some cases, translated to control things like prosthetic limbs or even to operate computers.

For instance, just this year in a study done at Stanford University, a participant was able to enter words into a computer by imagining they were holding a pen and writing letters on paper. Pretty amazing! There’s a lot that goes into it beyond just sticking a couple electrodes on someone’s head and letting them dash off a novel with their mind, but it’s the closest we’ve gotten to a mind-reading machine yet.

Yeah, yeah, yeah, but can I use my brain’s electrical signals in Skyrim? That’s what you’re thinking at the screen right now, isn’t it? And yes, you can, sort of, a little, in Skyrim VR. But you’ll need another semi-expensive device strapped to your head along with your VR headset.

First, there’s the mod for Skyrim, which is called Real Virtual Magic. It was created by Cangar, a modder and VR YouTuber who also happens to be a neuroscience PhD student at the Technical University of Berlin. With the help of a Muse 2 or Muse S device, the mod allows you to plug your brain into Skyrim (remember, you’ll also be wearing a VR headset) and, as Cangar puts it, “channel your mental power into the game.”

I’ve never heard of the Muse until today, but it’s a meditation headband that purports to detect and measure the activity of your brain, much as heart rate monitors keep track of your lub-dubs. Muse “is a multi-sensor meditation device that provides real-time feedback on your brain activity, heart rate, breathing, and body movements to help you build a consistent meditation practice,” says the website. Provided you don’t mind the stress of paying several hundreds of dollars for it, of course.

Does the Muse work? Does it help with meditation? I dunno. I’m not here to tell you that. But it appears to work when it’s on your head and connected to your PC with a bluetooth dongle, while you’re also jacked into Skyrim VR and running the Real Virtual Magic mod. The mod replaces Skyrim’s magic system with a new one that is dependent on your mind and mental focus.

Before you imagine yourself standing in Skyrim casting lightning bolts and fireballs just by thinking about them, that’s not what happens—at least not yet. What the mod does is let you fill your magic meter by focusing on it. With your mind.

In the video you can see Cangar in VR using concentration to fill his magic meter. When he loses focus, the meter begins to empty. This is important in the mod, because while you can cast unlimited spells, if the meter is empty they’ll do no damage. If it’s filled they’ll do double damage. So the ability to concentrate on keeping that meter filled is pretty important.

In another video, he demonstrates that while running and jumping around in Skyrim—or even doing things like blinking or moving his head back and forth—he loses concentration and when he checks his meter, it’s empty. By standing still, calming himself, relaxing and focusing (as in meditation) he’s able to refill the magic meter again.

I admit it’s a little frustrating that neither video actually shows Cangar, y’know, casting spells. After filling the meter using nothing but mental focus, you’d think you’d want to rain down some lightning or fling a few fireballs around. But the mod is still in alpha, and right now I guess it’s more of a proof of concept that brain signals can be used to do something in Skyrim. If you’re interested in testing it out and recording your brain data (you’ll need the Muse headset to do so, remember), Cangar has a discord server linked on the mod’s page on Nexus Mods.