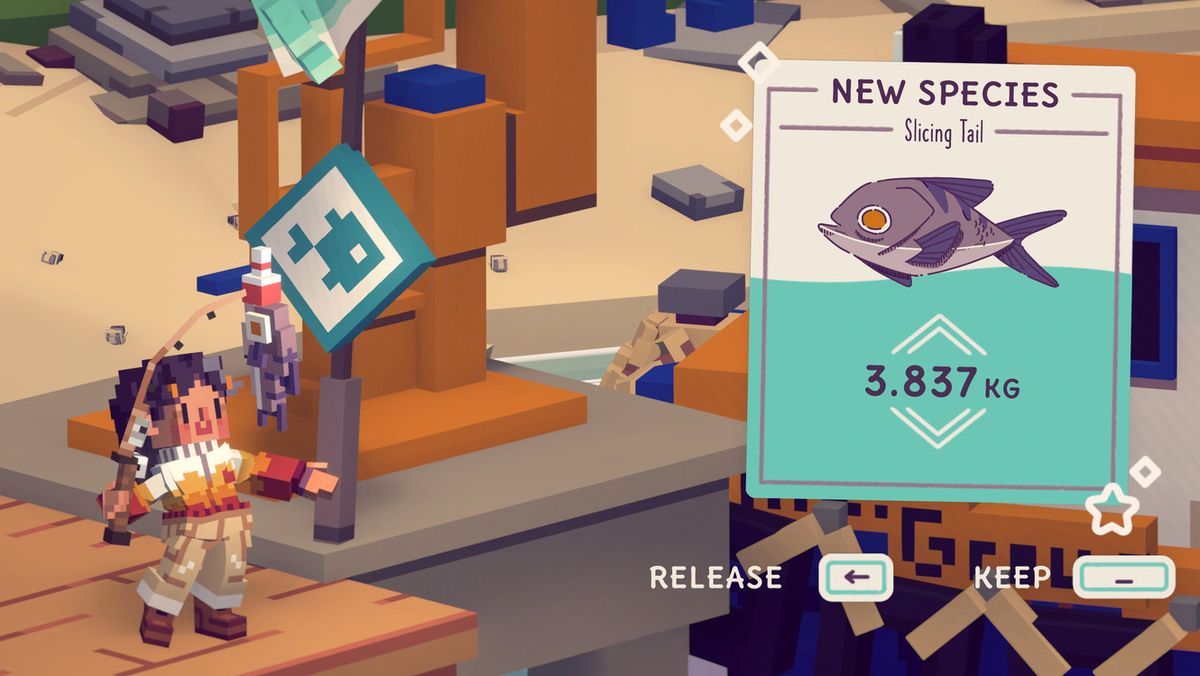 The quaint fishing town of Moonglow Bay has fallen on hard times. The streets, beaches, and even the bay itself are littered with trash. Shops are closed, buildings are falling apart, and the mayor is literally nailing boards across the door of city hall, ready to call it quits. It’s all due to the fishing industry, which has become nonexistent since rumors and sightings of a terrifying sea monster began to circulate and local fisherpeople became too scared to take their boats out into the bay.

The town isn’t the only thing deteriorating. You’re not doing so great, either. Due to a Pixar-level tragedy you haven’t left your little house in years, until a family member comes to drag you out of your stupor. How will you save yourself and Moonglow Bay?

Fishing. Lots and lots of fishing.

Thankfully the fishing in Moonglow Bay is completely engrossing, and it gets more fun the more you do it. Put it this way: I sat down to try out Moonglow Bay and the next time I looked at the clock, four hours had passed. “Huh,” I thought, “I should probably stop playing and start writing.” Then I promptly played for three more hours. There’s a wide variety of fish, and they present a different level of challenge so some are relatively simple to catch while others are much more of a struggle. Throw in your line and you’re never sure if you’ll nab a guppy that takes a quick pull to land, or if you’ve hooked a monster the size of your boat.

I began on the beach with a standard fishing rod, casting it into the water, waiting for a bite, and using WASD to pull against the direction of the fish. (You can also use a controller, and you probably should—more on this later.) A well-timed yank on the reel can quickly drag smaller fish right into your hands, so not every catch is a struggle. There are some real fighters out there in the bay, however.

After landing a few fish I was off to my small kitchen where each step of the cooking process involves its own seconds-long minigame. Wash the fish, chop the fish, fry it, boil it, bake it: they all require something different.

The games range between keeping the cursor inside a moving target, tapping a key when an indicator crosses a certain spot, and so on. The more complex the recipe, the more games it takes to complete them, especially if there are additional ingredients like potatoes or bead. Cooking the first handful of recipes you learn can get repetitive, but there are pages of new recipes to unlock and you can cook meals in bulk.

Before long, I had a small fishing boat so I could head out into the bay and surrounding waters to catch more fish. Lobster traps are also available, and you can bait them, drop them in the water, and come back the next day to see what you’ve caught.

The fishing net is especially useful: You can use it to catch insects on the beach that can be used as bait, and you can throw it into the water where you see a mass of fish to pull in several at a time, which is much quicker and easier than using a rod. You can also collect trash floating in the water to help clean up the bay, which is sorely needed.

There’s a huge variety of fish to catch, each beautifully detailed in your fishing journal, and with different rods and lures and a number of different regions to fish in, the pages of that journal will fill up quickly. And there are plenty of really big fish out there, too, so fishing becomes a mix of easy catches, moderate struggles, and challenging events. Hooking a massive fish I’ve never seen before, and having it muscle its way off my hook, is a huge incentive to stay put and keep fishing until I finally hook and land that bad boy.

You can donate fish to the local aquarium, which will give you more information about each species and make it easier to find them in the future if you need a specific fish for a quest or recipe. And you’ll be able to come back and admire your growing menagerie, Animal Crossing-style.

But mostly you’ll cook ’em and sell the meals from a vending machine outside your house (and if you’re tired of cooking you can also sell raw fish out of the same machine). A local shop can sell you additional vending machines to place around town, too, so you’ll quickly be making money hand over fist. And you’ll need that money because to save Moonglow Bay you’ll need to invest in local businesses that have gone under, as well as fund town projects like rebuilding the clock tower or library. There are plenty of other things to spend cash on. I’ve upgraded my little boat to have a bunk and its own kitchen, so when I go out on a cruise I don’t have to return home to catch some sleep or make meals. I’m also eyeing a pricey new engine so my boat will move much faster.

The town is full of colorful characters—many will tell you about rare fish you can catch, or request you make them a specific fish-based meal, or ask for help in the form of little side quests that may have nothing to do with fish at all. And of course you’ll need to deal with this legendary leviathan that has everyone too spooked to venture out into the water. Once you’ve made the bay safe again, the local fish market will open up giving you a place to trade your fish, buy more recipes, and get your hands on the high-quality bait you’ll need to land bigger and rarer catches.

As engrossing as it’s been to slowly go from a depressed fisherman with nothing but a single rod and handful of bait to a triumphant semi-wealthy boat-owner with a journal full of weird fish, there are some pretty big issues with Moonglow Bay. I suspect if you play with a controller you’ll be fine, but if you use a keyboard, be aware the controls can’t be remapped and there’s no mouse support at all, which makes navigating menus and other interactions a bit baffling. Backspace, for example, is how to exit menus rather than Escape, and J and L are how you change menu tabs. U and O rotate the camera view, while Q and E zoom in and out. Basic mouse support would make everything about Moonglow Bay much, much easier.

There are a few other problems. I’ve had two boss fights so far, and both have been fairly miserable experiences. One required me to suddenly learn how to use my fishing rod in a new way and included some quicktime events I’d never seen before, which isn’t something to spring on someone during their first boss fight. The other boss made me quickly switch between steering the boat and using my fishing reel, which is extremely tricky to do with such odd keyboard controls. I’ve also had quest markers pointing to the wrong places on a few occasions, meaning I had to remember where the character I needed to visit lived in town to complete their quests.

But even bad boss fights and seriously frustrating controls haven’t stopped me from enjoying the hell out of Moonglow Bay so far. The art and characters are charming, the fish are lovely and varied, and there’s a hopeful message about picking yourself up and dusting yourself off after life deals you a tragedy. Once I’ve finished writing this I know I’m going to immediately hop into my fishing boat and head back out into Moonglow Bay for more.