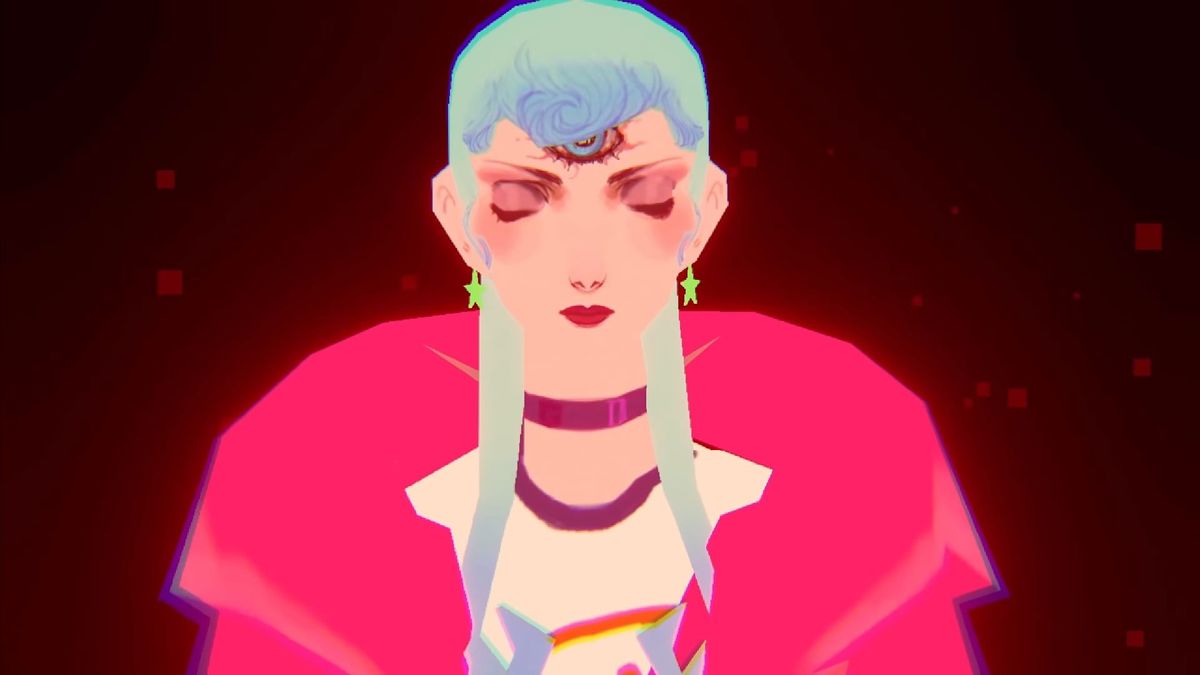 The folks behind the Haunted PS1 Demo Disc waited until October to bring us their second annual EEK3 indie horror showcase, because Americans insist October is the spookiest month. I mean, the Dutch call November Slachtmaand, which literally means slaughter month, but whatever. October’s fine, I guess.

EEK3 is an hour-plus of trailers in the low-poly horror style, hosted by Skully the skeleton: a staring abomination with an inhuman rictus grin who is not at all like a typical E3 host. (Skully wears a hat.)

If one hour and 23 minutes of texture blur and aliasing is a bit much for you, here are some of the highlights, pre-chewed and ready to be coughed directly into your waiting beak. Open wide.

Sorry We’re Closed, a mysterious burst of clear-line fresh air in a show dominated by VHS fuzz and voxels (trailer starts at 45.24). Michelle, the pink-jacket protagonist whose gun has a mouth, lives in a demon world where some of the demons seem quite nice. I don’t know what kind of game it is, but I want to play it. Due 2022 from à la mode games.

Hitflesh, a singleplayer simulation of a haunted MMO server. The Virtual Archaeologist Foundation has resurrected a beloved classic MMO, but maybe this particular fantasy world should have stayed dead. Demo coming to itch.io soon.

Heavenscape, which is about trying to get home at night in a city full of two-headed dogs, eyeball monsters, bird monsters, actually a whole variety of monsters. You’ve got a mobile phone to solve puzzles with, and I guess you could also call people on it. Developed by Hanging Rabbit, demo due October 22.

Necrofugitive, a fluid 2D action game where you’re a shapeshifting cultist. In one form you’ve got claws, in the other you’re a Slaughter Demon who can summon a small army of other demons and breathe fire. Due out on Steam in 2022.

Sauna 2000, a folk-horror comedy about a Finnish holiday gone wrong. An early demo of Sauna 2000 was a highlight of the original Haunted PS1 Demo Disc, setting you the seemingly simple task of gathering items to get a sauna going and then turning into an inexplicable nightmare. It’s extremely Finnish. New demo coming to itch.io soon.

Future Reality, a sci-fi racing game in the vein of Wipeout or Star Wars Episode 1: Racer, only sometimes instead of flying through tunnels lit by strips of neon arrows you’re racing through the innards of a toothy worm creature. Now this is pod racing, in the most fleshy and biological sense of the word ‘pod’.

El Paso, Elsewhere, a third-person shooter with bullet-time set in a twisted motel that has extended into the underworld. It’s basically Max Payne with vampires. And werewolves. Due 2022 on Steam.

Hollowsk 1999 3D, a first-person post-Soviet Silent Hill. I mean, its website is soviethill.com, I’m not being glib. Of all the town-full-of-fog games in EEK3, this was the one that stood out to me. It’s set inside a simulation of an endless city, where you’re supposed to be alone. And yet, out there in the draw distance, there are footsteps. It’s coming to Steam.

Dead Letter Dept., another entry for the typing games sure got strange list. You’ve got a job in data entry, typing up letters that for whatever reason couldn’t be delivered. A classic, soul-destroying dead end job. The letters shouldn’t sound like they’re written to you, right? Coming to Steam.

Plead With the Elder Gods, a 3D platformer with sword combat, dodge rolls, and sinister occult pacts. Based on Plead With the Mountain God, which was made for the Haunted PS1 Summer of Screams game jam, but significantly expanded. Due “When the gods will it so” on Steam and itch.io.

Ratuz, a stealth puzzle-platformer like Another World or Flashback, only with more giant rat-people. You’re the subject of a prison science experiment on the run, and you’re going to have to reload after a lot of gory deaths before you escape.

Derelikt, an FPS for fans of System Shock 2, Half-Life, and that one Alien Resurrection game on the PlayStation. When a gigantic creature is discovered floating in orbit around Saturn a research outpost is built on the being’s body, and this delightful location is where you’re headed. Coming to itch.io.