In an article on the Official Playstation Magazine UK, new details have been revealed about upcoming Action-RPG Godfall which includes influences such as Dark Souls.

Godfall To Play on PS5 Like No Other Game, Influenced by Dark Souls and MHW

The upcoming title Godfall developer by Counterplay Games has gotten some new details which were shared in the latest issue of the Official Playstation Magazine UK which was summarised on the Resetera forums by a user name bob101. It confirms that the title will be on Playstation 5, with no plans to release on Playstation 4 or cross-gen. The game is being built to tailor run on the PS5, with it’s CPU and GPU making the gaming experience feel like no other.

What’s also interesting to note is the combat style has gotten its influence from titles such as Monster Hunter World and Dark Souls. The game encourages “aggressive play” with skill based combat relying on “timing in order to hit max damage”. You will also have a class based system, with different types of armor, 3 sets to choose from. There’s also high customisation to unlock as you progress the game.

Further details also revealed include the high fantasy aspect, with the elements being the core pillars of the world, “Earth, Air, Fire and Spirit Elements”. There is also a little backstory unveiled in the article, sharing that the player’s role is under the Knight’s Order, to stop an event of apocalyptic nature. The visual aspects are inspired by fantasy novels The Stormlight Archive, The First Law and Foundation series. 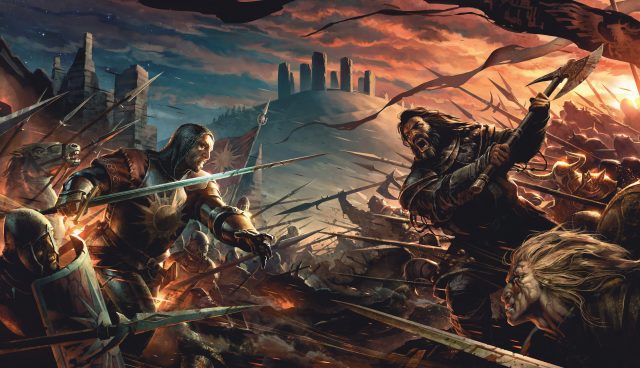 Illustration for the the First Law triology by Joe Abercrombie via the official website.

Gameplay also is designed around a “drop in and drop out” system similar to that of Destiny or Monster Hunter World, but with a heavy Dark Souls influence.

These are some interesting new developments to hear about. Earlier this year we got a glimpse of an internal trailer which showed some of the early footage including some combat and enemies. But we are still waiting to see more of an official look in terms of gameplay. Godfall is described as a looter-slasher with high-impact combat.

Godfall will release on PC and will be a PS5 launch title this year 2020. You can check out our Everything We Know About Godfall article for more details.

For more on Godfall you can drop by our Godfall wiki for all the latest.