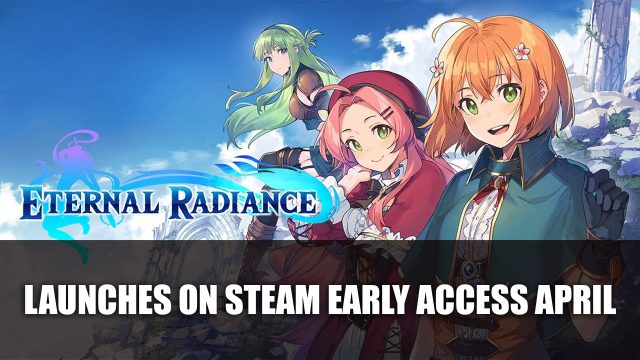 The developer Visualnoveler has announced they will be release an Action-RPG Eternal Radiance for PC on Steam Early Access on April 14th. The Early Access will grant players three story chapters with the estimated play time between 8 to 12 hours. The full game will release on a number of platforms Playstation 4, Switch, and PC with a total of 11 chapters.

Eternal Radiance is a fast-paced Action-RPG with playstyles that can be customised and upgradeable elements, as well as talent tree. The story is character-driven, following Celeste who will embark on a journey across the continent with her companions Valana and Ruby.

The title features a dynamic battle system with a variation of foes to fight. Make your battle plan, use special attacks and destroy you enemies. There’s also plenty to explore with fields, towns and dungeons to discover.

You can check out the announcement trailer and screenshots below:

Eternal Radiance releases on Steam Early Access on April 14th. The title will come to Playstation 4, Switch and PC upon full release.

For more news be sure to check out next Final Fantasy VII Remake Final Trailer Released and E3 Sets Its Sights For 2021, IGN “Summer Of Gaming” In June 2020. If you liked the look of this game, you might be interesting in check out Genshin Impact Closed Beta Preview – Breath Of The Elements.