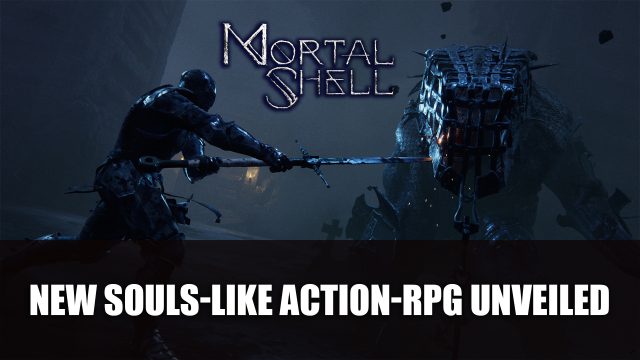 A new upcoming Action-RPG called Mortal Shell has been unveiled with a trailer showing the dark action combat coming to PC, Playstation 4 and Xbox One.

Developer Cold Symmetry and publisher Playstack have unveiled a new souls-like game today called Mortal Shell. The trailer shows off some of the dark and hellish creatures found in the shattered world. Players will become one of the lost warriors that you awaken, taking their Mortal Shells, obtaining not just their bodies, but also their understanding of combat techniques. You will then do the bidding of the mysterious “Dark Father”, searching for hidden sanctums with its dedicated followers.

Along this journey you will encounter a number of brutal creatures, horrifying figures that are hell bent on destroying you, with the aim of harvesting their sacred glands. But with your combat prowess, weaponry and pure resilience, you can take down these terrible foes.

Previously Mortal Shell was under the project name Dungeonhaven, but has since been renamed and being developed by a London based, talented team of 15, who have worked on some of the biggest AAA titles and are passionate about souls-like games.

The trailer shows a cinematic that features the dark fantasy world, and features a fair few number of interesting environments, every one just as dark and perilous as the last. You also see some elemental AOE type attacks and even floating enemies which could prove for some interesting fights. According to the Steam page, the title sets to be a single player and will be releasing on consoles as well. If you’re interested in joining the beta, be sure to visit the Mortal Shell official website to sign up.

You can check out the trailer below and screenshots:

Mortal Shell will release on Playstation 4, Xbox One and PC, scheduled to release in Q3 2020.

For more news be sure to read next Wolcen Build Guide: Slayer Of The Leviathan and The Waylanders Is Coming To Steam Early Access This Year. If you’re looking for some RPGs to play this month, be sure to check out Top 5 Upcoming RPGs Of April 2020 (Final Fantasy 7 Remake, Hellpoint, Trials Of Mana And More!).