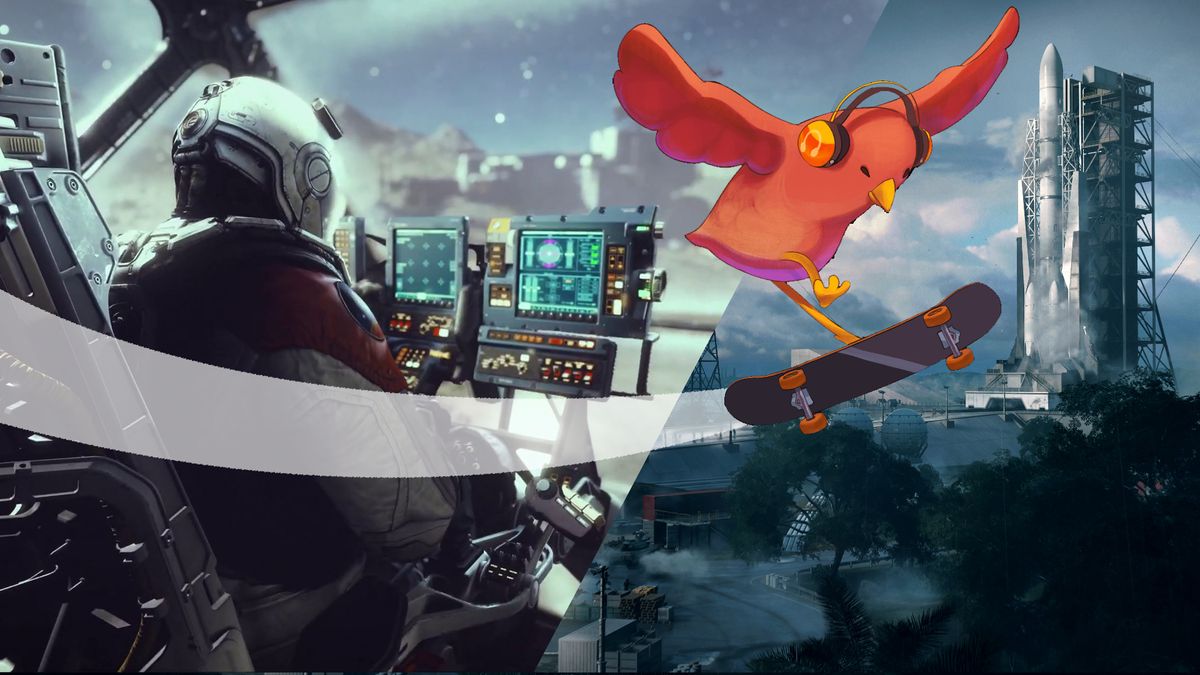 Remember the mo-capped Call of Duty: Ghosts dog that was a big deal at E3 2013? If not, don’t worry. The bar for sharable E3 moments was lower then, and dogs are over. I didn’t see a single mo-capped dog at E3 2021. I just saw birds. Lots of birds.

We’re still trying to digest all the games and stories from E3 2021. There were packed streams full of back-to-back indie trailers, and now there are far too many demos on Steam for anyone to play. The new Microsoft-Bethesda super publisher is a little scary, and the future of PC gaming might have a lot to do with how Xbox Game Pass evolves over the next few years. It’s such an incredible value right now that it seems irrational not to subscribe, but that is, of course, how they get us.

It’s a lot to think about while we still have the “E3 Exclusive” motion graphic burned into our short term memories, so I’ve put aside deep thoughts to observe some of E3 2021’s more immediate trends:

The first teaser for Bethesda’s sci-fi RPG, Starfield, is set inside a spaceship, but not a Star Trek or Mass Effect spaceship. There are no holographic screens that pointlessly float five inches in front of panels. The controls are physical buttons, knobs, and switches. It looks like a flight simulation enthusiast’s abridged 747 cockpit setup. Superyachts and military-grade laptops also come to mind. I wonder about the effectiveness of the cup holder.

Bethesda wasn’t the only one to bring thrusters to E3. Battlefield 2042 is obviously set just 21 years from now, and one of its maps takes place at the foot of a launching rocket. Next Space Rebels, seen at the PC Gaming Show, is a rocket-building sim with an FMV narrative. Ixion, also at the PC Gaming Show, is about building and managing a space station city. It’s perhaps more speculative than the others (it starts with a dude accidentally blowing up the moon), but still references the look established by real space programs. (It bears mentioning that there will be aliens in Starfield, too, so it’s not all lowkey sci-fi.)

That’s just a few games, but my gut says that the possibilities presented by commercial space exploration—for discovery and for disaster—are only going to become more influential. There’s a direct reference to SpaceX in Mass Effect Andromeda, and at E3 2019, Todd Howard and SpaceX founder Elon Musk shared a stage for a moderated discussion. Howard said that Bethesda visited SpaceX headquarters while doing research for Starfield, and described Starfield’s space travel as “dangerous,” like flying airplanes in the 1940s. (He said a lot more about Starfield during E3 this year.)

There’s a lot of interest in exploring space travel as something we could really be doing in a few hundred years. The Expanse is super-popular, and Netflix has been pumping out shows about perilous space adventures: Another Life, Lost in Space, Away.

Further into the future, both in terms of settings and probable release dates, The Outer Worlds 2 was announced during the Microsoft-Bethesda supershow, and we know that BioWare has another Mass Effect in the works. It’s unlikely, but we could see a tease for that at EA Play Live in July.

As Wes pointed out, it was a big year for birds: White Shadows, Death’s Door, Skatebird (as seen in flying across image at the top of this article), and Bird Problems all feature avian protagonists, and were shown at E3 2021.

Is that enough to declare it the “year of the bird,” as Wes has? I’m not so sure, but I do agree with one thing: several games this year included birds. (On second thought, I am a bit tired of the “can you pet the dog” thing, so if we’re switching to birds, maybe I can get behind it being the year of them.)

What do we call these? Left 4 Dead-likes? That sounds terrible. I guess we’ll stick with “co-op zombie shooters,” but we all know what game they derive significant portions of their structure from.

Two of the games shown at E3 this year were direct descendants of Left 4 Dead. Back 4 Blood is a co-op zombie shooter made by Turtle Rock, the studio that designed the original L4D. (It’s complicated, but Turtle Rock was part of Valve for a while, and isn’t now. Valve still owns the Left 4 Dead name, hence the close-but-not-quite allusion.) The other L4D descendent is The Anacrusis, a co-op alien shooter from a new studio co-founded by Chet Faliszek, who was Valve’s top writer until he left in 2017, and who worked on Left 4 Dead and Left 4 Dead 2.

There were other L4D-inspired games. Arkane’s got one now: Redfall, where the zombies are vampires. I’m speculating a little given that the reveal trailer didn’t show any gameplay, but it’s clearly a 4-player co-op shooter about fighting off hordes of monsters. So is Evil Dead: The Game.

Rainbow Six Extraction is one I’ve actually played, but I agree with Morgan that it’s not as Left 4 Dead-ey as it looks on paper. We spent a lot of time creeping around popping alien goo bubbles. Still, it did have us reviving each other and dashing to an extraction area.

These aren’t the first or only games that are a bit like L4D, obviously. Vermintide 2 is a PC Gamer favorite, as one example. Darktide, which wasn’t at E3, will shuttle that idea from Warhammer’s fantasy universe to its 40K universe sometime this year. There are many more beyond that.

I imagine the L4D rush will be a bit stressful for the developers competing with each other—it seems unlikely that they’ll all release hits—but it’s great for us. We’ll just shoot whichever zombie stand-in turns out to be the most fun to shoot. I’m hoping Arkane’s try works out, because vampires seem like a fun enemy. (At least until they teleport or turn invisible, two common and annoying vampire behaviors. One of the player characters seems to have their own invisibility powers, though, so that’s nice.)

Loot boxes: There are still some holdouts, and you’ll have to tear FIFA Ultimate Team from EA’s cold dead hands, but it seems like the industry is pretty much done with these things.

Battle royale games: Battlefield 2042 will not have a battle royale mode. Doesn’t seem like much else will, either, and Ubisoft didn’t even mention Hyper Scape. I guess Warzone, Apex Legends, Fortnite, and PUBG can just keep the genre.

Stomp-clap songs: A few years ago we couldn’t stop hearing what we’ve termed stomp-clap songs. It’s those songs that have a stomp, and then a clap, repeated, like We Will Rock You (but not that song). Sometimes there’s humming. Here’s an example. The industry seems to have moved on, and I kind of miss them now that they’re gone, to be honest.