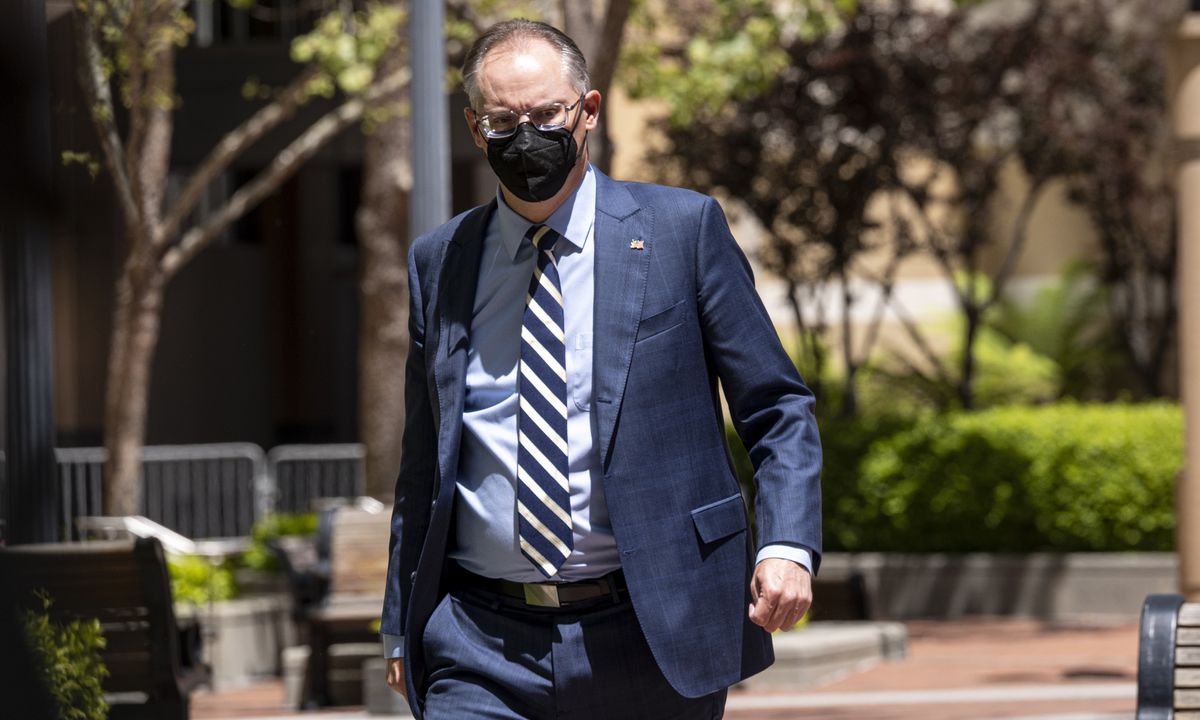 The companies have jabbed at each other for the past year, building their cases. (Epic CEO Tim Sweeney practices his ripostes on Twitter weekly.) Now the time has come to square off in person: The Epic and Apple trial has begun.

Here’s what to expect from the trial, and what it’s all about in the first place.

When and where is the Epic v Apple trial?

The trial is going on now: It started on Monday, May 3 and will take “15, maybe 16 days, maybe 17 days,” according to US District Judge Yvonne Gonzalez Rogers, who said in a pretrial conference not to expect a speedy resolution.

While some civil court business is being handled over Zoom these days, Judge Rogers and the US District Court of Northern California decided to hold this trial in person in Oakland. A limited number of people are being allowed into the courtroom, and mask-wearing is required. Witnesses will wear clear masks so that their facial expressions are visible.

What kind of trial is Epic v Apple?

The Epic v Apple trial is a bench trial, which means there’s no jury. Judge Rogers will decide the outcome.

Can I listen to the trial?

Yes. The Epic v Apple trial is being broadcast to the public live over call-in lines. You can find the details on the Northern California US District Court website.

Recording is prohibited, although there will be transcripts to refer to later. If a technical mistake allows you to speak on the line, it’s probably best not to yell things like “I would suck all of you to get Fortnite mobile back,” which one person did when the trial started. (But don’t let me stop you from living your dream.)

The early days of Apple played a profound role in shaping my life and views on computing. Every Apple ][+ booted up to the BASIC programming language, and everyone was free to create and share software, and to grow businesses on their own volition. pic.twitter.com/MOkqhHCWuSMay 2, 2021

What the trial is about

Why is Epic suing Apple?

Epic says that what Apple is doing is “anti-competitive” and that it has “monopoly power,” which both mean that Epic thinks Apple has too much control over a market. The term “antitrust” is similar, but refers to efforts to counter monopolies. In the trial, Epic will reference “antitrust laws,” which are laws against anti-competitive behavior.

Software developers who want to release iPhone apps must do so through the iOS App Store, where Apple takes a cut of each sale. iOS apps also have to use Apple’s payment processing for in-app purchases of digital items (Fortnite V-bucks, for example), and Apple takes a cut of that, too.

Epic says that iOS is an unavoidable operating system for mobile devs—most people either have an iPhone or an Android phone—and so it’s not fair that Apple forces everyone to play by its “oppressive” rules. And according to Epic, Apple’s rules for third-party iOS apps aren’t just unfair: they’re anti-competitive and illegal.

Epic wants Apple to let users install apps that aren’t distributed on the App Store, and for it to let developers use their own in-app payment processing, bypassing Apple’s fee. In other words, Epic thinks that iPhones should be more like Windows 10 PCs, where you don’t have to use the Microsoft Store to buy or sell software if you don’t want to.

OK, but what does Epic really want?

More money! For starters, Epic wants to sell V-bucks in Fortnite without having to pay Apple’s 30% fee.

Epic didn’t go through all this trouble just for Fortnite dollars, though. It also sees itself as more than a game or engine developer, and wants to build a “metaverse” where players and creators can buy and sell content and play games across platforms. Getting rid of rules and fees on smartphones would certainly help Epic achieve that.

In the near term, Epic wants to release a version of the Epic Games Store that sells mobile games, but right now it’s against Apple’s rules to release a “store within a store”—that is, an iOS app that sells other iOS apps. And definitely forget using your own payment processing. A ruling in Epic’s favor could change that.

Above: Epic’s PR campaign against Apple was a subject of the trial’s first day.

The latest from the courtroom

What’s happened in the trial so far?

Week one is over, and as far as Epic and Apple’s arguments go, there weren’t any surprises. The attorneys for each side are making the arguments laid out in documents submitted before the trial (I explain many of them in the sections below).

Sweeney talked about the “metaverse” he’s trying to build—Epic recently announced $1 billion in funding for that vision—and expressed that Apple’s App Store policies are unfair. He faced a somewhat difficult question on day two: Couldn’t the iPhone Fortnite app send users to the Safari browser to buy V-Bucks? Apple doesn’t disallow purchases made through a web browser. Epic could do that, Sweeney had to say, but it’s inconvenient for users. Judge Rogers didn’t seem too convinced that the inconvenience is a big deal given that Fortnite players tend to be young.

Apple also wondered why Epic is fine with putting Fortnite on the PlayStation even though Sony has similar rules. This led to an (expected) argument over whether or not game consoles and smartphones are the same kinds of things. Microsoft took Epic’s side on this—that consoles aren’t the same because they’re single-purpose devices—and revealed that it’s never made any money selling Xbox hardware.

The surprises during the first week mostly came from documents revealed as evidence, and from a few comments from the lawyers, such as the claim that itch.io games are unspeakably offensive.

Epic is a private company, so it doesn’t have to announce financial results to the public. It does have to reveal information and documents relevant to a big trial, though, so we’re getting our first unfiltered looks at its spending and dealings. Here’s what we’ve learned so far:

What does Epic have to prove to win?

To that end, Epic argues that there’s a “foremarket” for smartphone operating systems, iOS and Android, and an “aftermarket” for apps that run on smartphone operating systems. Cars and car parts are an example of a foremarket and aftermarket: Toyota sells cars, which creates an aftermarket for replacement Toyota parts and Toyota repairs. Epic says the same kind of thing is going on here: By selling iPhones, Apple creates “iOS app distribution” and “iOS in-app payment processing” aftermarkets.

If the court accepts Epic’s definitions of those markets, the company will then have to demonstrate that Apple’s behavior is anti-competitive and that Epic’s proposed remedy is legal. That won’t be easy. Vanderbilt Law School professor Rebecca Haw Allensworth told Reuters that it’s “not a super-strong suit,” and that Epic probably won’t win.

What are Apple’s counter-arguments?

Aftermarket? What aftermarket? Apple says that it doesn’t control a market, it’s competing in one. As far as this case is concerned, Apple sees the App Store as a “game transaction platform” which competes against other game transaction platforms, such as the Google Play store, Steam, and the PlayStation and Xbox stores. In that market, Apple doesn’t have anything close to monopoly power: It estimates it has 23.3% to 37.5% of the market share.

And sure, some people think the 30% App Store revenue cut is too high, but that’s what the market settled on. To stay competitive with Google, Microsoft, Valve, and others, Apple hasn’t raised it over 30%, and to keep up with that competition, it recently lowered its cut for developers who make under $1 million in revenue per year. Is that what a monopolist does?

That’s just one of Apple’s lines of argument. It’s poking at Epic’s claims from every rounded, brushed aluminum angle it can find. Here’s a sampling of Apple’s other arguments, paraphrased:

What it all means

If I were taking bets, the odds would favor Apple to win. However, even if Epic loses, it’ll probably see it as just one battle lost in a war against walled gardens—a long held stance for Sweeney and Epic. (Although Apple alleges that Epic tried to negotiate a side deal just for itself before suing, suggesting that the company is more self-serving than it claims.)

Epic has certainly shown that it can light fires with the help of its new Fortnite riches. After it loudly declared that Valve’s 30% cut of revenue on Steam is too high (by launching its own competing store and buying a bunch of exclusives), online stores did start to change their fees. Microsoft recently announced that it’s dropping its cut to 12%, which is the same cut the Epic Games Store takes, for example. Epic isn’t entirely responsible for that movement, but its noisiness and competitive spirit certainly played a part.

Even with a loss, Epic’s sustained pressure against closed OSes may nudge the industry in its preferred direction. That’s one thing Sweeney and Valve president Gabe Newell can agree on, at least. Both were critical of Microsoft’s old attempts to control Windows application distribution, Newell of Windows 8 especially, and Sweeney of UWP more recently. Microsoft has backed off from those efforts, and has even started releasing its games on Steam again.

Microsoft has also amassed subscribers with a cheap Xbox Game Pass introductory offer, and has been collecting game developers, including Bethesda and Obsidian, so I don’t want to understate its power. But Windows PCs certainly aren’t like iPhones. If things had developed that way, there’d be no modding, no Steam vs Epic Games Store wrestling, no DRM-free stores like GOG. From the perspective of a longtime PC gamer, it’s easy to see why Epic is disappointed by Apple’s partial control of smartphone gaming (and to a lesser extent, Google’s looser control of the rest).

Our preliminary conclusion: @Apple is in breach of EU competition law. @AppleMusic compete with other music streaming services. But @Apple charges high commission fees on rivals in the App store & forbids them to inform of alternative subscription options. Consumers losing out.April 30, 2021

Apple is also taking heat independent of Epic’s suit. Along with Google, Apple was the subject of a US Senate antitrust hearing a couple weeks ago, and a complaint from Spotify currently has the company defending its App Store policies in Europe. If Epic loses, the change it’s trying to achieve could still be accomplished separately by government regulators—although an Epic loss here may hinder that effort, according to an official who spoke to Reuters.

What if Epic wins?

If Epic did win, it would be a huge. Apple argues that such a ruling would open game console makers to similar judgements, forcing Microsoft and Sony to open Xboxes and PlayStations to all software, letting anyone bypass their official stores. That isn’t Epic’s intention, necessarily, and I don’t know that anyone really expects such a sweeping judgment to be made, but the decision would certainly change the mobile app business and establish a limit to the “walled garden” hardware and OS model, favoring free software distribution.

Whatever the outcome, it will certainly be appealed.

What happens to Fortnite?

When is Fortnite going to return to the App Store?

I don’t know, but there’s a pretty popular game called “Battle Destruction” on there you can play instead. I’m sure it’s just as good as Fortnite.