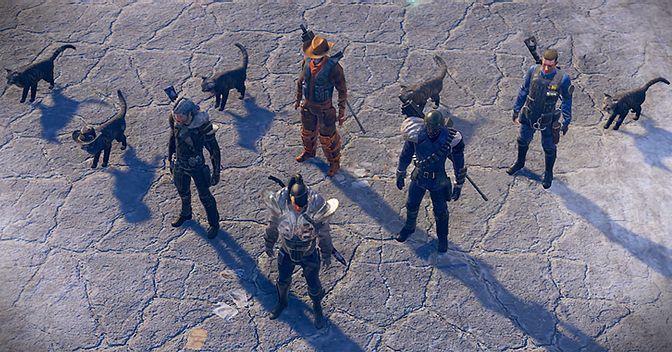 In the lead-up to Wasteland 3 expansion The Battle of Steeltown, due on June 3, InXile Entertainment is outlining its next free update, patch 1.4.0. Part of the focus is an upgrade of the animal companion system, and that means Polly the swearing parrot will get an even fouler mouth. Beak? Whatever.

Polly is getting a Demoralize ability to make use of those swears, and all your animal companions will now have a kennel to return to. If you dismiss them they’ll head back to the kennel, making it easier to recruit them again. Type limits are going away as well, meaning that instead of just having one of each animal you can have multiple goats, or cats, or chickens, with icons and health bars noting which of your party members has which pet incorporated in their character portraits.

On the subject of companions, bugs that meant human and robotic followers could sometimes vanish mid-game are finally being fixed, which is great. I realized Provost had gone missing deep into my own playthrough and didn’t want to reload an hours-old save just to bring him back.

Head over to InXile’s feature preview to hear the parrot in action. There’s a separate preview of the crafting system that’ll be part of patch 1.4.0 as well, letting you turn scrap into gear including new weapons like the W.A.S.P. gun, which is a gun that fires wasps instead of bullets. With that and my party full of cats, the wasteland will be even wilder when I return.