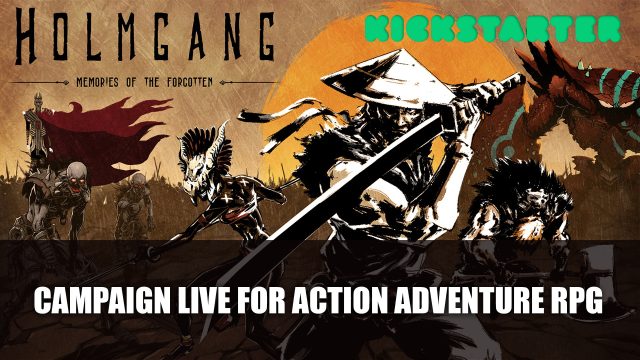 Zerouno Games a new games studio has announced the launch of their Kickstarter campaign for a 3D action adventure RPG called Holmgang: Memories of the Forgotten.

The developer Zerouno Games is made up of former staff from a few companies such as 343 Industries, Electronic Arts, Mercury Steam and Rockstar games. They have announced they have launched a Kickstarter campaign for a “3D action adventure quick RPG”. The campaign goal is $45,000 in funding.

Describing the title as a “quick RPG” which means roughly 8-10 hours for each playthrough. Each time you play there will be different route maps and secondary missions as well as different endings that will affect the personality of the character. Players also received various rewards dependent on the outcome of those missions, making each run a unique experience.

Kickstarter tiers all include a code for the game upon release, as well as various in-game content, t-shirts, posters and more. The highest tier offers backers a permanent placement in the game with their very own tombstone to commemorate their backing. The top tier also comes with a physical version of gaming, including game box, copy of the game, manual, cloth world map and sketches.

The game will feature hack ‘n’ slash combat, with each character featuring their own combat style. You can also craft your very own combos using the combo editor and enhance each character using a skill tree for a more customised experience. The Kickstarter page describes the gameplay to be similar to titles such as God of War, Castlevania and Dead Cells, where you can explore world as well great narrative.

You can check out the official description according the the Holmgang: Memories of the Forgotten Steam page, there is also a pre-alpha demo available for free:

Every legend has a dark side. Twenty-two years before Dragon King’s reign, an empire emerged. An empire whose single aim was the annihilation of life. Relive the tragic days of the Shadow War.

After the death of king Haziel of Draken, his son, Hazulem, proclaimed himself emperor of Dracorum. Through the invocation of the First Hierarchy demons, he imposed its reign of terror all over the planet. Experience the story of a group of ill-starred heroes that decided to make a stand and change the course of history forever.

Fight like Kandar, the barbarian, Tatsu, the ronin, and Valentia, the Amazon woman, and defeat the dark secrets of Emperor Hazulem. Reclaim your honor and take your place within the legends.

If you want to join in, in backing this game be sure to visit their Kickstarter page.

Holmgang: Memories of the Forgotten Kickstarter campaign current has 28 days to go with a current backing $2,745 at the time this article was written. The developer plans to release the title on PC first via Steam and DRM-free platforms. They also have the goal to release on Mac, Linux, Nintendo Switch, PS4 and Xbox One.

For more news find it here in Dishonored: The Role-Playing Game Is A New Tabletop Out Now, Final Fantasy 7 Remake Midgar To Get Expanded Setting Plus Final Details and Dread Nautical A Horror Themed Strategy RPG Releases On Consoles And PC Next Month.