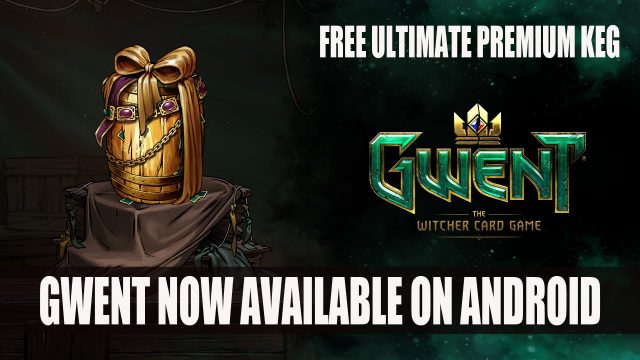 CD Projekt Red have announced that Gwent: The Witcher Card Game is now available on Android starting from today.

The developer CD Projekt Red has announced that Android users can now access Gwent: The Witcher Card Game from today. The card game is based on the The Witcher 3: Wild Hunt and has been available on a number of devices and adds Android to that list. This means you can now play Gwent on the go if you use an android device.

GWENT is live on Android! Download now on @GooglePlay! 🤖 pic.twitter.com/bQl7MrRiE4

In addition to making Gwent available on another platform, CD Projekt Red are also giving players a chance to pick up a free Ultimate Premium Keg, just by downloading and logging into the game as a way to celebrate its launch, available now until March 31st. Players will need to look out for the news section after logging in to claim their free keg.

To celebrate the launch of GWENT on Android we’re giving out 1 free Ultimate Premium Keg upon longing into the game on Android! Be sure to get yours today!

The game first released in late 2018 on PC with beta test and then official launched on console and mobile since. iOS gained a version last autumn which was the first mobile version. While still available on console, CD Projekt Red announced last year that they would discontinue support of PS4 and Xbox One versions in order to cope with the support on more active platforms PC and mobile. If you’re looking to transfer from console to another device, you can until June 9th 2020 with a few conditions.

For more news be sure to read next Dishonored: The Role-Playing Game Is A New Tabletop Out Now and Final Fantasy 7 Remake Midgar To Get Expanded Setting Plus Final Details. You can also check out Dread Nautical A Horror Themed Strategy RPG Releases On Consoles And PC Next Month.