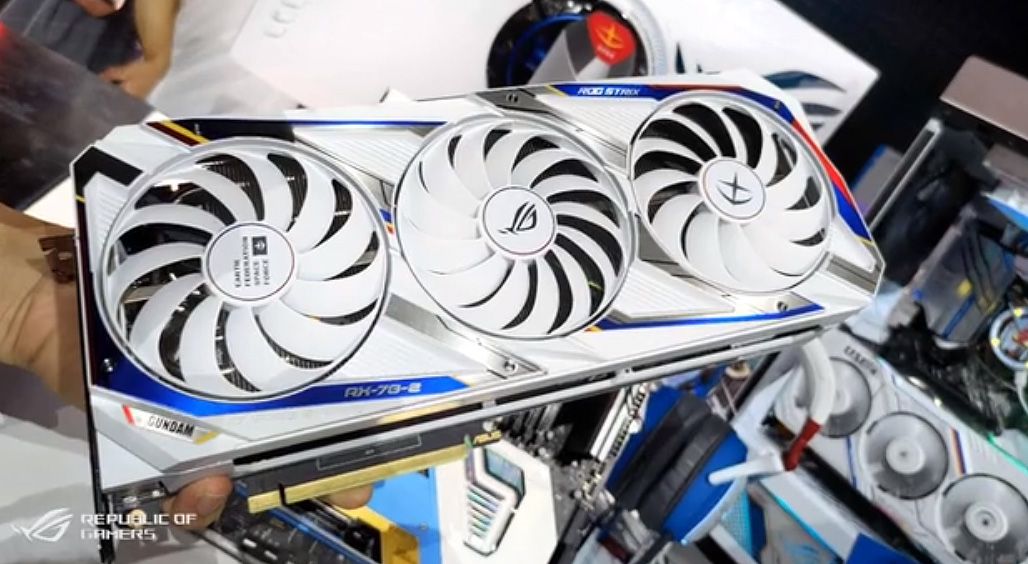 During a recent Republic of Gamers event, Asus showcased a bunch of high-end PC hardware decked out in Gundam digs, like the ROG Strix GeForce RTX 3090 Gundam Edition graphics card pictured above. It is a fairly fleshed out lineup covering multiple graphics cards, motherboards, keyboards, mice, and even wireless routers.

Several of the products can be seen in a video on Bilibili (via @momomo_us) with an oddly satisfying piano arrangement playing in the background (better photos can be seen over at iHeat). The 3090 appears to be the same as the factory overclocked model Asus offers, with a 1,890MHz boost clock in OC mode and 1,860MHz in Gaming mode (up from Nvidia’s 1.7GHz reference boost clock).

Diehard fans of the anime series could pair one of these stylish GPUs with other Gundam-themed components, including a Maximus XII Extreme motherboard, 850W power supply, and a 240mm or 360mm all-in-one liquid cooler, all at various marked up price points.

Unfortunately, Asus is limiting availability to Japan. Some of the products are already available to purchase, however, including a Wi-Fi 6 router (available in white or red and black) and a 240mm Zaku Edition liquid cooler.