In this Nioh 2 Build Guide I’m going to show you how to play the Thunderous Spear Build using Heavy Armor and a Spear to swing fast and furiously without dying. I’ll be showing you where to place your Stats and Skill Points to get the maximum impact for this Build, as well what equipment to use, and which Guardian Spirit and Soul Cores to have. This is a starter/mid game Build meant for players just beginning Nioh 2, or for those that are early to mid game and are having trouble. This Build will be updated as I reach higher levels of the game and more equipment becomes available.

The Thunderous Spear combination of Heavy Armor and a Spear that allows you to not only Block most attacks done to you, but to also unleash a devastating barrage of attacks that keep enemies pressured and debuffed. Lightning plays a minor role in this Build, but it does allow you to set the Shocked Status Effect, slowing enemy attacks. The focus of this Build is using Low Stance so that you conserve your Ki when you attack, so that you can then Block afterwards without becoming Winded. 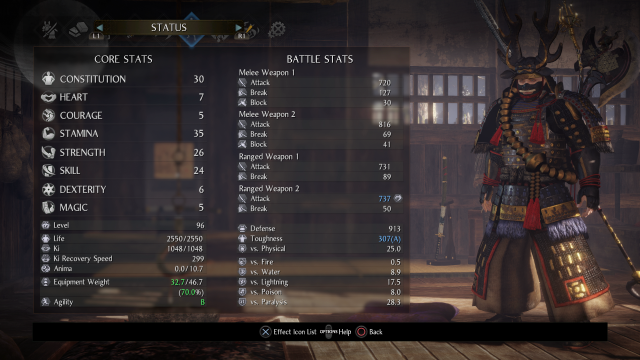 The way this Build works is that you will begin combat with either High or Low Stance depending on your opponent. High Stance is used to dispatch easy to kill enemies quickly, such as Gaki or Humans. The last hit of Spearfall will knock Humans to the ground, allowing you to hit them with a Final Blow. You’ll use Low Stance on most Yokai that are harder to kill, allowing for longer combos that drain more Ki than High Stance. Additionally, Low Stance combos cost less Ki, which makes it possible to attack and then Block afterwards.

The Thunderous Spear Build uses several stats since we wear Heavy Armor and wield a Spear. It focuses on, Stamina, Constitution, Strength and Skill. Stamina is needed to use Heavy Armor effectively, lowering Equipment Load, and we want enough points here to keep at 70%. This will take such a huge investment you likely won’t reach this until around level 70 or so when you can respec. Until then you just want to make sure you have enough to be below 100%. High Constitution gives you a lot of Health and increases damage with the Spear the best. Then comes Strength and Skill which further boost damage, as well as give you things like increased Ki Pulse, which helps with Ki management.

Because your main Stats for this Build are Stamina, Constitution, Strength and Skill, it makes a lot of sense to use a Spear, since it scales off of 3 of these.

The spear you want to use for this Build early on is whichever one you can find that you like the most like a Yokai Spear or one with Lightning Imbued into it if possible. There are no Spear sets early on in the game, so you won’t have access to the Tombokiri immediately. Once you reach Region 3 you can face Honda Tadakatsu in the Horns on Head, Dragonfly in Hand Sub mission to farm this Spear and the Warrior of the East’s Honor Set that goes with it. 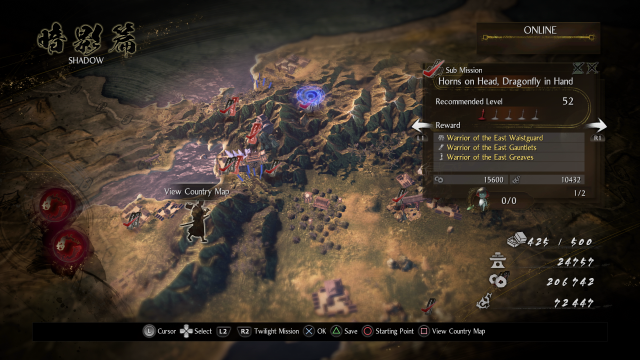 Bonuses you want on the Tombokiri are things that reduce Ki cost, primarily in Low Stance since that’s where you’ll really need the Ki the most. When you use Spearfall to kill weak enemies, Ki is not as much of a concern since things die fast, so we don’t really need Ki in High Stance. Look for Quick Attack Ki Consumption, or Low Attack Ki Consumption, and Block or Low Guard Consumption. Essentially, you want anything that will reduce the Ki you use, because you will use a ton Blocking and Attacking. 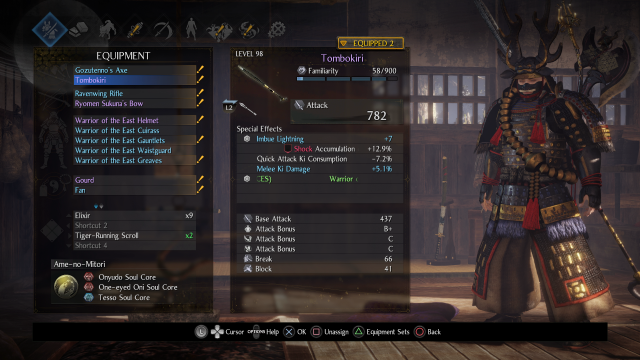 For Ranged Weapons you can use whatever you like. You’ll have points in Strength and Skill making Hand Cannons a good choice, but what you use here is really up to you and how you play.

Early on in the game you’ll want to look for the Golden Boy Set as this will help to increase your Lightning Damage and melee damage vs. Electrocuted enemies. You likely won’t have a spear at this point so you’ll need to use the Lightning Talisman to gain this effect when you are facing tough to kill Yokai or Bosses. It’s also Heavy Armor so it’ll allow you to play in the same manor as that of the Warrior of the East’s Honor Set. 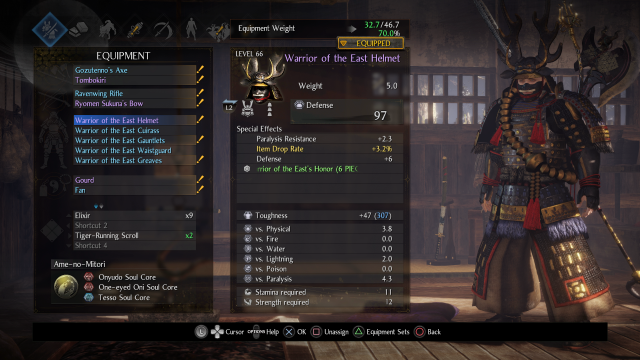 Once you can face Honda Tadakatsu you’ll want to farm the Warrior of the East Armor and Tombokiri until you have the pieces you want. Look for any bonuses that reduce Ki usage, and Temper for these if you want.

Accessories are a bit of a strange mix in Nioh 2, and you might find that you’ll use something you didn’t think you would, just because it’s available here and you rarely find the perfect Accessory. For instance, I like to use one that has Enemy Sensor so that I am not ambushed, and instead I can setup ambushes of my own. I cannot understate how valuable this one bonus is, and you might wish to sacrifice other great bonuses just to have an Accessory with it. Ideally though, you’d take any bonuses that reduce Ki consumption or increase Ki Recovery, like some of the Fans. 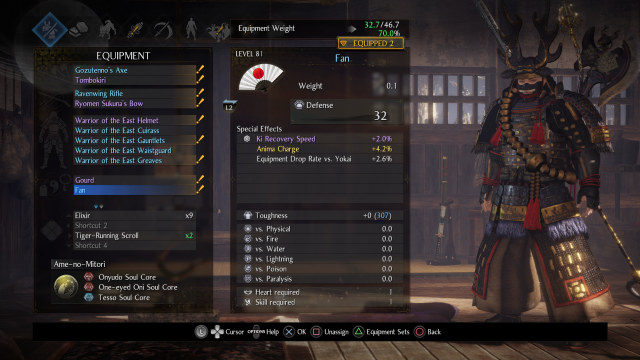 Where to place your Skill Points is a vital part of making any Build in Nioh 2 work, and in this section we’ll take a look at the things you need to create the Thunderous Spear Build. Since all Nioh 2 players use Samuari Skills, let’s begin there before we take a look at Spear, Shifting and Omnyo Skills.

You’re going to be using Low and High Stances for this Build, so you want to take Ki Pulse: Heaven, Running Water: Heaven, Ki Pulse: Earth, and Running Water: Earth for sure. One great thing about this Build is that by taking these you can Purify Yokai Realm without having to Ki Pulse the traditional way, but can instead do so by Dodging. Additionally, those Skills that increase your damage when you get a perfect Ki Pulse are good. You’ll also want Flux as it will help with Ki Pulses, allowing you to reclaim more Ki by swapping Stances at the same time as you Ki Pulse. 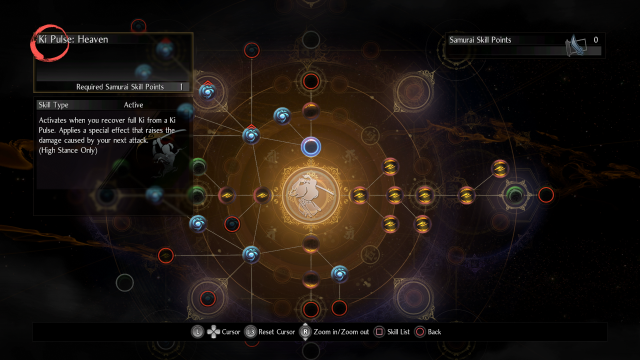 When it comes to Spear Skills you’ll be using quite a few Active Skills for this Build. You’ll want Spearfall in the High Stance as this does incredible damage, and you’ll also want Spear Flourish which will protect you when you Ki Pulse in High Stance. Spear Shove is great when playing defensively, and Chidori is great for Low Stance to add an extra hit that then knocks enemies up into the air for extra damage if they run out of Ki. Flying Monkey is a must for Low Stance as it allows you to avoid attacks and get the drop on some enemies at the same time. There are tons of passives that are good here and you should aim to get these after these Active Skills have been taken.

When it comes to Shifting Skills you’ll want The Yokai Within and The Dark Within to help with Ki Recovery when fighting Yokai or in the Dark Realm. Special Finesse: Invigorate will increase your Ki Recovery after using a Burst Counter, and Special Finesse: Refresh will replenish a ton of Ki after performing one, so be sure to get these when you can. Everything else is completely optional. 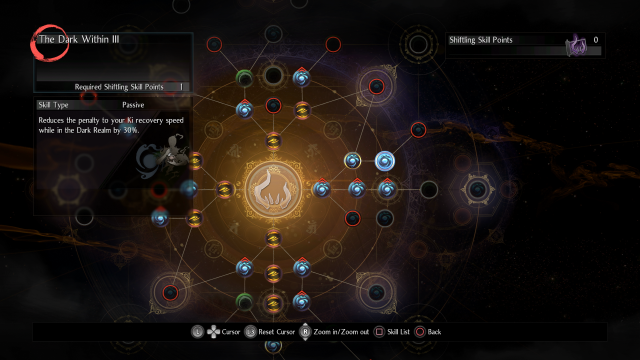 There are a couple Talismans that work well for this Build and those are Lightning Talisman and Barrier Talisman. Lightning will boost your Lightning Damage on melee attacks, and Barrier will increase your Ki Recovery which you can never have enough of. Get both of these if possible. 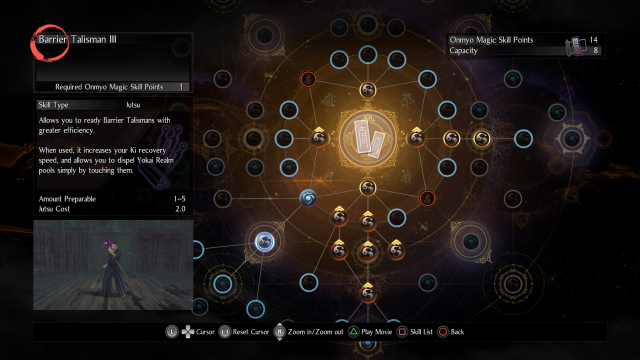 Guardian Spirits play a pretty large role with most builds, particularly when you are min/maxing. For this Build I recommend a Feral Guardian type for the added mobility, because its Burst Counter can be used as a dodge in addition to the Counter mechanic, but you can use any type. 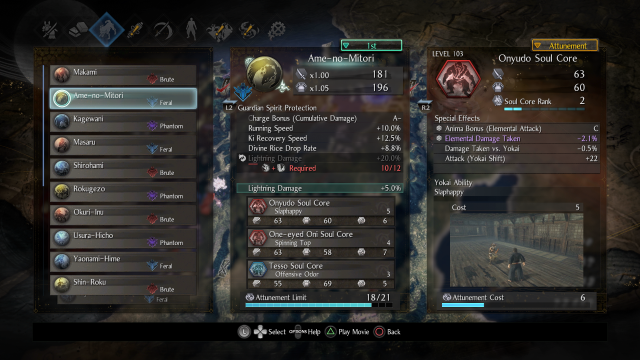 I suggest beginning with Ame-no-Mitori. This Guardian Spirit increases your Running Speed and Ki Recovery Speed, both of which are excellent for this Build. Divine Rice can be used to trade for items at Shrines, which is nice, but not a must have. The Lightning Damage is also a nice boost to your Talisman buff or when you finally have Tombokiri. 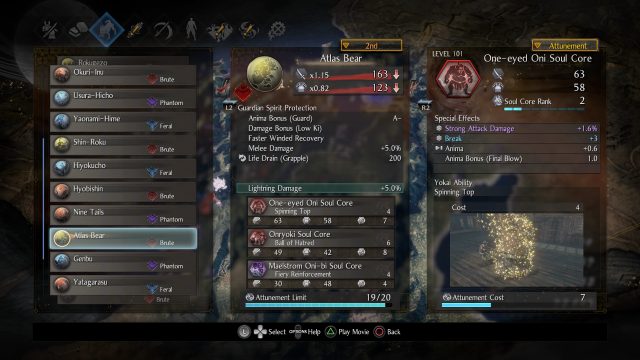 Another great option for this Build if you’d rather have a Brute Guardian is Atlas Bear. With this Spirit you gain Anima on Block, which you tend to do a lot, as well as a Damage Bonus when you are low on Ki, which is also quite often. You recover from being Winded faster, and you have increased Melee Damage and regain Health when you Grapple. All of these are quite good for this Build.

As far as Soul Cores go I really like the One-Eyed Oni and the Onyudo Soul Cores for this Build. These both don’t give the greatest benefits, but they have amazing Yokai Abilities that hit repeatedly, helping to apply the Electrocuted Status Effect and dealing damage while your Ki recovers. Use either of these at the end of combos when your Ki is low, allowing you to keep on swinging without worrying about defense. You have very Heavy Armor and even if you get hit in this form, you will likely take little damage and come out with a full bar of Ki. 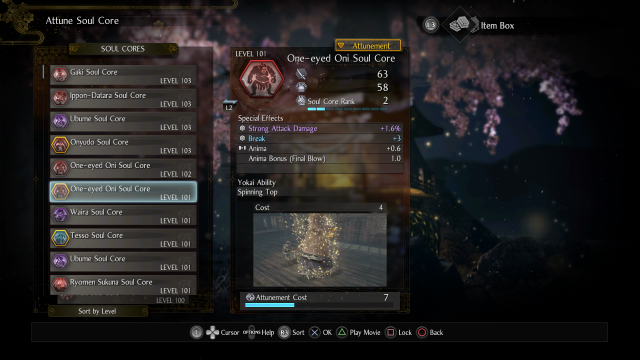 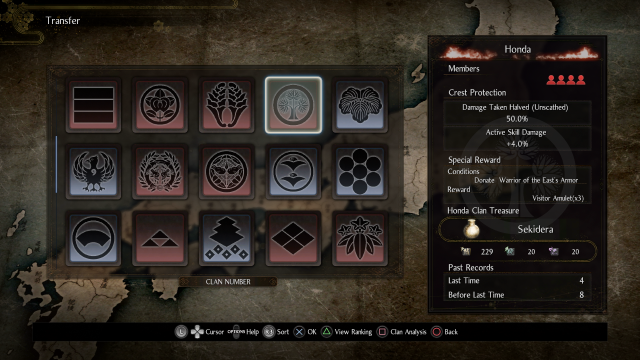 Try not to worry about the +30% Merciless Barrage damage from the Warrior of the East Set because it only applies to Grappled enemies, which are only humans. Additionally, you tend to knock Humans down rather easily with this Build, especially if you use Spearfall, pretty much wasting this passive entirely. Just pretend it doesn’t exist and swap to another Set with better bonuses like The Crossed Sickles once you can get it.

Remember to use your Yokai Skills when you are low or out of Ki. This is a great time to punish enemies with these as you recover Ki the whole time they are active and continue to deal damage. Save your Anima for Burst Counters and these moments when out of Ki to make sure that you are not killed. Note that you can use the Yokai Skills I mentioned to avoid grab attacks completely.

Stamina plays a huge role in this Build but you won’t have the points to get to the 70% threshold on Equipment Load until you have tons of Skill Points or your character will be gimped for damage. Try to place the minimum points into Stamina to not be over 100% Load, until you can respec later on in the game and hit that mark without gimping yourself too much. There is no point in investing 30 Points into Stamina to be at 73% Equipment Load as you still wont gain any of the benefits of hitting that mark, which are faster movement and better Ki management.

Lastly, you can Block tons of attacks with this setup and if you co op it’s a great idea to “tank” for your group. You can literally stand in front of just about anything and block for extended periods while they circle around behind and attack. Your teammates will love you, and you can pile on if they Stagger the enemy with your lightning fast attacks from Low Stance!

Stay tuned for more Nioh 2 Guides, including Builds and Weapon Guides, and be sure to check out our Review for our thoughts on the game. We’ll be doing a Red Demon Spear Build a bit later on, which has a bit of a different focus. If you need further help, head over to the Nioh 2 Wiki, and don’t be afraid to add information that might help others out!