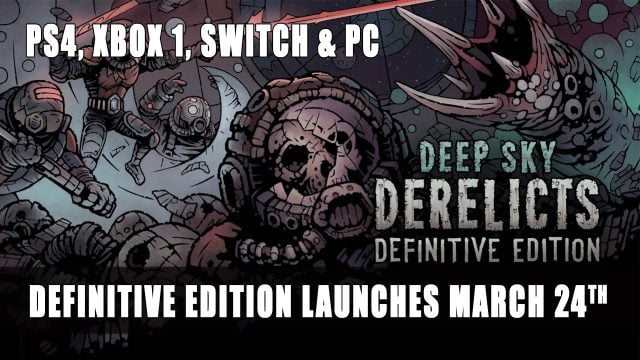 Deep Sky Derelicts originally launched on Steam Early Access in 2017. Now the rogue-like RPG is coming to more platforms in the form of Deep Sky Derelicts: Definitive Edition on March 24th. It will be releasing on Xbox One, PS4, Nintendo Switch and PC.

The title a dystopian future where mankind is now living across the galaxy and humankind has two classes. As poor outcast who’s only form of survival is live of the scraps found on derelict stations in space, you’ve now heard of an alien ship that may be hidden in the Deep Sky sector and maybe your chance for a more comfortable life.

Together with a crack team of scavengers, improve their skills and equipment by exploring these decrepit space stations, dangerous planets and these deserted alien ships. Fight monsters for loot and use what you find to upgrade your gear.

Deep Sky Derelicts sets offers a futuristic comic book art-style, with a fresh take on tun-based combat with cards. There’s plenty of customisation options and a number of ways to put your scavenging team together. The title offers story campaign and arena mode. The definitive edition comes with base game and two DLC packs.

You can check out the features and trailer below:

If you want to check out more rogue-like action be sure to read next Curse Of The Dead Gods Preview – An Addictive Punishing Roguelite. You can also check out more indie titles in Children Of Zodiarcs Coming To Xbox One And Switch On March 27th.