News could be on the way for upcoming NieR Replicant, as new ratings in Taiwan for all platforms surface.

Recently a rating for upcoming NieR Replicant Ver.1.22474487139… has popped up, which might suggest we’ll be hearing more about the remaster soon. It was spotted by Gematsu, which found all three versions which include PS4, Xbox One and PC versions have been rated, which is about 5 months when Square Enix had announced the upgraded version. 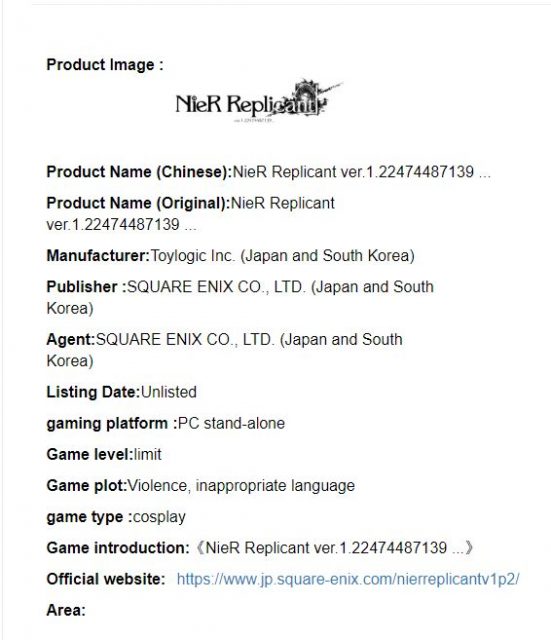 This isn’t the first time Taiwan’s ratings have given a headsup in terms of upcoming games. Previously in April Mafia II and Mafia III definitive edtion ratings took place and this let us know that they were on the way. Then in June, it was the rating for Crash Bandicoot 4: It’s About Time, which was later announced by Activision and developer Toys for Bob, a few days later.

If this follows the previous pattern, then we could be getting some more news about the game. It was back in March of this year when NieR Replicant Ver.1.22474487139… was revealed, being more an upgraded version of the 2010 original. The Japan-only Playstation 3 release will be finally coming west. It will involve director Yoko Taro (Nier Automata), composer Keiichi Okabe and Square Enix producer Yosuke Satio.

The PS3 version of Replicant follows the story of a young protagonist named Nier, who in search of a cure for his younger sister Yonah. There was also the Xbox 360 version which was called Gestalt, which follows the same story, however on a different timeline and a different family relationship dynamic.

The Tokyo Game Show 2020 will be taking place this September, so this could be a good place for an announcement. However the currently revealed lineup doesn’t have Nier on the list, but there is always hope with a few blank spots still open.