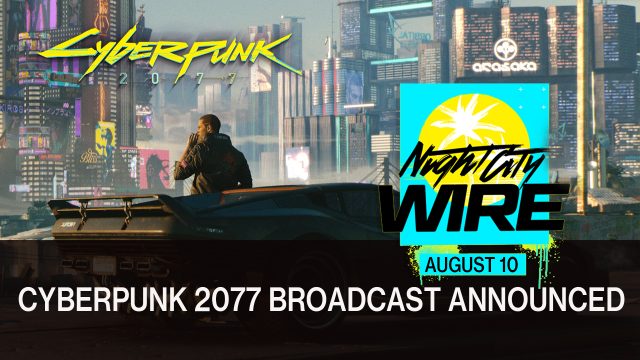 CD Projekt Red have announced the next Night City Wire broadcast which will focus on Cyberpunk 2077 new details including weapon types, lifepaths and more.

CD Projekt Red have announced the next livestream for Cyberpunk 2077 will take place on August 10th at at 6PM CEST on Twitch. It will give brand new details on the Action-RPG which includes weapons, lifepaths and “discuss Refused’s transformation into SAMURAI!”.

Join us on Monday, August 10 at 6PM CEST, at https://t.co/y8iUIM0gBv for episode 2 of Night City Wire! This time we’ll share details about lifepaths, show you the types of weapons you will be using in the game, and discuss Refused’s transformation into SAMURAI! #Cyberpunk2077 pic.twitter.com/n3LFFocbVI

The developer previously held a broadcast at the end of June which covered gameplay of the Braindance Editor system, a sort of VR investigation chair, which allows the protagonist V to review a robbery. What’s unique about the this sci-fi feature is that not only can you playback events as they happened but pick up clues, find new angles, and learn what the culprit thought and felt.

Previously it was also revealed earlier last month why the feature wall running was ultimately cut from Cyberpunk 2077. Hopefully we will get to see further in features that are coming the launch of the game.

Cyperpunk 2077 will be releasing on November 19th for Playstation 4, Xbox One and PC. Plus PS4 and Xbox One versions will be backwards compatible with PS5 and Xbox Series X. It will also be arriving on Stadia sometime after launch.