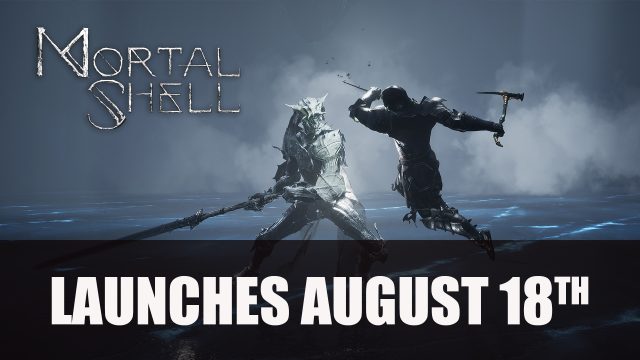 Developer Cold Symmetry and publisher Playstack have announced the souls-like Action-RPG Mortal Shell will be releasing this August.

The developer Cold Symmetry has released news today that their dark Action-RPG Mortal Shell will be launching on August 18th on Playstation 4, Xbox One and PC digitally. The beta that took place last month received over 350,000 players in just one week, surpassing more than 6 million views across Twitch and Youtube.

Along with the news of the release date comes a new trailer showcasing a range weapon, the Ballistazooka. This weapon has the capability of launching heavy iron bolts at amazing speed. Not only powerful enough to impale enemies, but also pin them onto nearby structures. The trailer gives us a peek at the devastating weapon in action along with a quick snippet of one of the game’s terrifying foes, locations and the mysterious fourth Shell to be unveiled, Solomon.

Co-founders Andrew McLennan-Murray, Anton Gonzalez, Dmitry Parkin, and Vitaly Bulgarov released a joint statement expressing their overall appreciation for the amount of attention the beta received and the game itself:

Our commitment to our fans is to create a soulslike game that is authentic, uncompromising and
unrelenting. We were humbled by the popularity of the beta and we closely studied the feedback we
received to create something that we are incredibly proud of.

You can check out the trailer below and the latest screenshots for Mortal Shell:

If you want to know what’s striking about Mortal Shell, this souls-like brings its own flavour to the genre, as players will take on the dark world while adopting different Shells which grant a number of skills and special abilities. Combat is shaped by the shell you inhabit and warriors you choose to awaken.

Mortal Shell will be available for $29.99 on the Epic Games Store, on the Playstation Store and Xbox Games Store. The PC is a time-exclusive on Epic and will later be releasing on Steam in 2021.

If you’re interested to find out more about this dark fantasy Action-RPG you can check out our gameplay on our Youtube channel and also drop by our Mortal Shell wiki for all the latest.