Horizon Zero Dawn is an unequivocal landmark of gender equality in AAAs. Aloy reps the cause so overtly that it barely even needs to be said. She’s a strong female character in every way, from her practical, unsexualised character design to the pivotal role she plays in the story. Hell, she even comes from a shamelessly matriarchal goddess-worshipping society.

But plenty of games have strong female characters. Horizon Zero Dawn is one of the first to take the next step, setting its heroine free in a truly progressive world.

Warning: Some minor spoilers follow for events leading up to (and including) Meridian. This post has been retimed following Horizon’s release on PC later this week.

“Is it risky to do a female character?”

The strong female character has long been a hallmark of supposedly progressive games, from Lara Croft to Samus Aran to Faith Connors. These badass ladies have always kicked ass and taken names with the best of them – albeit sometimes donning some highly questionable outfits. Horizon lead with its intention to add another strong woman to these ranks very early on, even though the decision to focus on a female lead character was sadly still seen as a ‘risk’.

Shuhei Yoshida, President of Sony’s Worldwide Studios, revealed in an early interview that they had felt the need to put the game through rigorous market testing for this reason. “She’s a female lead character,” he explained. “That has always been the vision by the team, but we had a discussion. Is it risky to do a female character?”

Thankfully, this rigorous process turned out the desired outcome in the end.

Aloy is a great character. There’s no denying it. She’s intelligent and curious, but can kick ass when she has to. She wears practical outfits that are still filled with personality, and has a unique face that looks like it belongs to a real person. She takes initiative when other characters falter and doesn’t hesitate to tell it how it is, frequently questioning the status quo. She’s a redhead. She’s a progressive herself, breaking taboos and changing tradition where she sees fit.

The devs behind Horizon Zero Dawn have indicated that this was very much their intention. While they wanted to make a game with a female character, they wanted her to be an interesting character first and foremost. “What we have been focusing on is not if it’s male or female, but it’s more to figure out her personality,” director Mathijs de Jonge told Gamespot in an early interview. “Make her personality really interesting.” 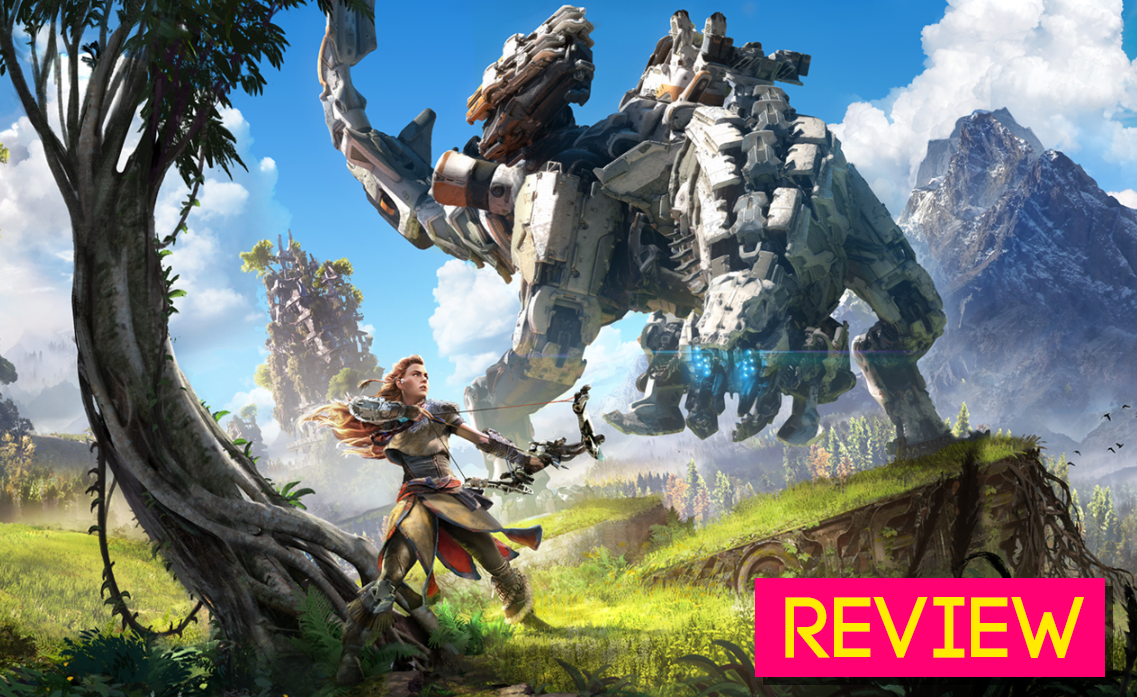 For years now, the latest console generation has been coasting on the idea that more raw power means better games. The PS4’s newest exclusive, <em>Horizon: Zero Dawn</em>, is the rare game that delivers on that promise.

But Horizon has something that sets Aloy aside from the rest, and sets itself aside from most female-led games. Guerrilla Games have unshackled Aloy from the tired ‘strong female character’ cliché – a woman trying, struggling to make her way in a man’s world. Instead, Aloy gets free reign to be more than just an icon for her gender.

She has to overcome the burden of being an outcast in a tribe of traditionalists, maybe, or an outsider in new and foreign lands – but for once this strong female protagonist can do her thing without the script calling attention to her femaleness again and again. A large part of this is thanks to the way that Aloy’s very world functions.

To break this down, let’s start at home with the Nora tribe. The Nora are traditionally matriarchal, placing a heavy emphasis on the role of mother and resting power in the hands of a council of matriarchs, yet beyond this the Nora don’t seem too fussed about gender at all. Young men and women run alongside each other in the proving to become braves. The tribe’s most powerful warrior, Sona, is a ruthless woman of colour who will stop at nothing to get her vengeance.

While female gamers deserve to see themselves reflected in strong warriors just as men do, the Nora are all the more remarkable for their embrace of the feminine as they are for the toughness of their female warriors. It’s not just the women who are unbothered by gender norms in Nora lands.

Another Nora we get to know is Teb – a young man first encountered when his complete lack of physical prowess lands him in hot water with a herd of robots. Teb later reveals that he has become a ‘stitcher’ for the tribe instead, a position he seems to both enjoy and take pride in. For the Nora it’s not only acceptable for a woman to assume traditionally masculine qualities, but also for a man to embrace feminine-coded ones.

While stories of both father-son and mother-daughter bonding are common enough to be tropes, barely any examine the relationship between a father and his daughter. While Rost often toes the line between father and mentor, their bond is unmistakeably close. “We said nothing of love,” Matriarch Lansra admonishes Rost in the prologue, but even by that time it’s too late. Aloy even has the option of honouring Rost in a section of the Proving ritual usually dedicated to mothers.

After spending far too long meeting various Nora and finishing sidequests inside the Embrace, I realised something. In more than ten hours of gameplay I couldn’t remember a single time someone had referred to Aloy as a woman. There was no “I can’t believe a woman won the Proving,” or “it’s too dangerous for a woman”, the kind of dialogue I’ve sadly grown accustomed to through years of female-led games. This time, everything was focused on Aloy’s accomplishments.

Sadly this disregard for gender norms isn’t as overt once you cross the border into the wider world of Horizon Zero Dawn. The Nora’s problematic neighbours, the Carja, do come across as the most gender-restrictive tribe in the game, but even then they don’t seem to stick to that restriction too strictly.

Despite the hunting lodge’s trader Aidaba saying that “Carja don’t exactly encourage their daughters to run around hunting machines”, this attitude is not absolute. In fact it’s disproven almost immediately when you’re sent to find a female hunter named Talanah, tasked with trying to become her apprentice. Even the Lodge’s man in charge and resident asshole Ahsis has far more of an issue with Aloy being a ‘savage’ than he does with her gender.

The Carja do have some rules surrounding gender roles, evidently. A soldier posted in a remote prison in the southern jungles reveals that women are not allowed to serve in the Carja army – although the soldier who tells you this, Janeva, is a woman herself. Kind of. Janeva is strongly hinted to be either trans or non-binary – a group rarely represented in AAA games.

“No woman is allowed to serve,” she says, explaining that instead she “became a soldier”. Though other characters still do refer to her as a she, she still doesn’t hesitate to threaten you if you voice any curiosity about her genitals.

Thankfully, the Guerrilla devs haven’t used the Carja’s restrictive culture as an excuse to skimp on female characters. Even when you pass through the gates from the Nora’s matriarchal homeland to the great wide world beyond, Horizon doesn’t stop throwing amazing women at you. Aloy is not so much a woman struggling to make her way in a man’s world, but an active participant in a world full of strong, accomplished women.

Women On A Mission

Horizon Zero Dawn ticks another box in female representation when you realise that all of the women in the game are distinct and different. They are incredibly diverse racially for one, running the gamut of racial features from African to Asian to Hispanic and more. The scope of diversity in Horizon perfectly reflects the fact that Horizon’s future world would realistically have much the same mix of races as we have today.

Beyond racial diversity, Horizon’s women all have interesting personalities and traits beyond just ‘being a woman’. Even the most minor female characters encountered have their own motivations and ambition to make their mark on the world in some way. In fact it’s hard to find a woman without agency in Aloy’s world.

Very early on, Horizon flips the overused ‘fridged woman’ trope on its head – wherein dead wives, girlfriends and family members are used as a plot device to further a male protagonist’s story. While speaking with Oseram warrior Erend before the Proving, he mentions that his sister Ersa was taken by the mad Carja Sun King’s armies to fulfill a blood sacrifice.

Thankfully this isn’t your classic dead-female-family-member-revenge-plot – instead, Erend reveals that Ersa actually survived, escaped, and went on to lead the army that would eventually overthrow the mad king. She later even became the head of the new Sun King’s Vanguard, and appears to be loved and respected by many of the Carja in Meridian – despite being an Oseram herself.

Even among the Carja women there exists an attitude of change, a resistance to stifling traditions. With this year birthing huge female-led movements like the Women’s March in January, the simmering undercurrent of revolution among Horizon’s women reflects something very real for most of the women who play it.

While plenty of characters appear to mourn the old Carja regime of terror, most of those characters are men. In most cases the characters who push back the hardest are women – or, in the case of one small sidequest, a gay man.

Take the hunter Talanah, for example. While she reveals to Aloy that she aims to open up the traditionally noble, traditionally male Hunter’s Lodge to people of all walks of life, it’s strongly hinted that she has already worked for many years to blaze a trail for female hunters to join.

In this context of change, Aloy is more than just a heroine.

She’s a catalyst, a point of inspiration for women in the tumultuous Carja lands. While almost everyone you talk to is impressed by Aloy’s exploits, many of the women seem not just impressed but inspired. Horizon depicts a world in flux, a world actively working for a better future even in the face of destruction.

While Aloy is symbolic of resistance in many ways, she never feels bogged down in sexism. Horizon is unapologetic about putting a woman in a position of power and prestige: no ifs, ands, or buts required. Aloy earns the reputation she carries throughout the game, but it isn’t by having to prove herself against a hyper-masculine standard.

So is it really risky to make such a woman-focussed game? Not at all, if the success of Horizon Zero Dawn is anything to go off. It even out-sold Breath Of The Wild in the UK to take the top spot on last week’s chart.

The risk paid off, and fittingly Sony has changed its tune. Earlier in February before the game’s release, Sony Interactive Entertainment UK’s product manager Jon Edwards sounded far more confident of their risky female character, describing her as “a PlayStation icon of the future.”

With women in both the games industry and the world at large demanding to be heard, developers can look to the example that Horizon Zero Dawn has set. Female protagonists are important, but they need to be raised up by women around them, by the very world they move through. This is how you make an icon.