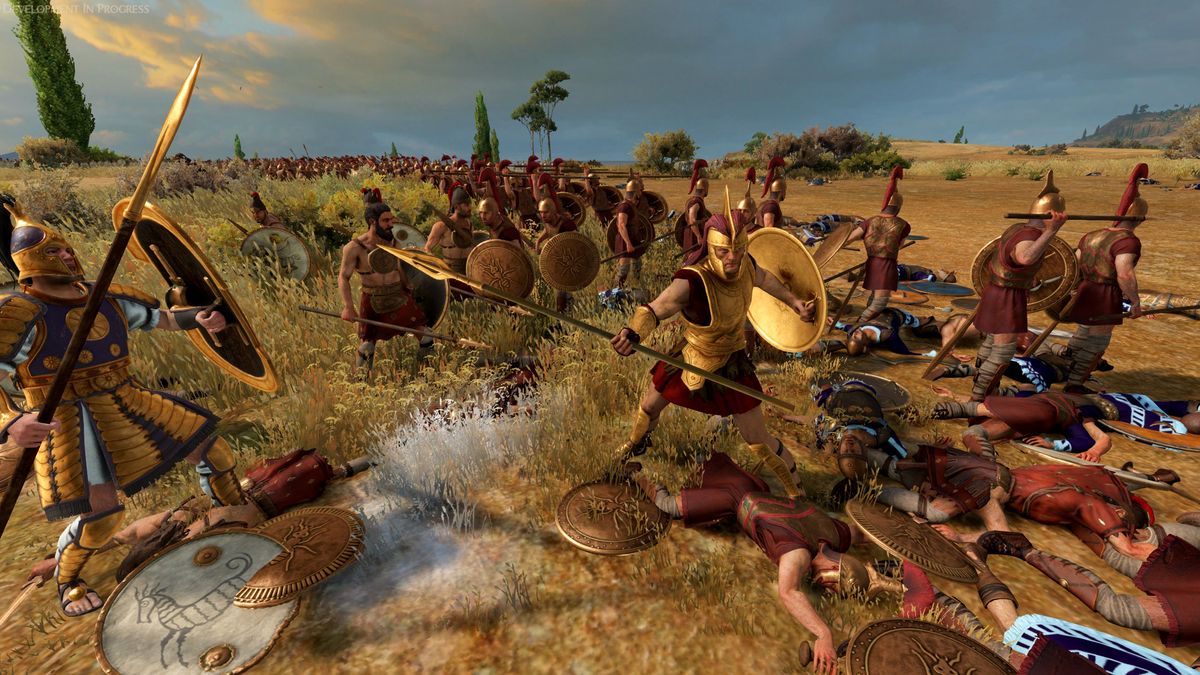 Come August 13, when A Total War Saga: Troy launches, Creative Assembly will have three Total Wars on the go, and that means there’s a lot of DLC coming. In its July dev blog, the developer teased what’s coming to each strategy romp later this year.

Troy in particular is going to have a busy year, starting with the Amazons DLC in September. If you sign up to Total War Access, you’ll get this DLC for free, but it will only be available for a limited time. It will be accompanied by Epic Games Store mod support.

Blood & Glory, presumably the gore DLC, will appear in October, along with some free DLC, Artemis, likely adding the deity to the in-game pantheon. Multiplayer will then launch in November for everyone. Ajax and Diomedes will be joining the roster of heroes in winter, accompanied by more free divine DLC, this time focused on Hephaestus.

Most of Three Kingdoms’ DLC so far has added new chapters to the campaign, honing in on specific flashpoints in the conflict, like the Yellow Turban Rebellion, adding new events, factions and characters. The next DLC, however, is Three Kingdoms’ first expansion, throwing a brand new faction into the war. The Nanman will be shaking things up in the South, and while Creative Assembly is yet to detail the faction, it’s a safe bet that Meng Huo, a rebel leader who was transformed into a king by Romance of the Three Kingdoms, will be leading them.

Along with the Nanman, the expansion will finally introduce gate pass battles, and more settlements are being put on the campaign map near choke points to create some more interesting fights and make certain places easier to defend.

Warhammer 2, which I’m convinced will never stop spawning DLC, is giving wood elves some attention. If you’ve just got Warhammer 2, you’ll get a pair of lords and their own factions, and you’ll be able to play them in the Eye of the Vortex campaign where they’ll have unique mechanics and objectives. Introduced in DLC for the first game, this is the first time the race has been playable in the sequel campaign. All players will also get a free hero who’s yet to be unveiled.

If you own both Warhammers, you’ll be able to use the new factions and units in the Mortal Empires campaign, where wood elves are also being reworked. Owning the Realm of the Wood Elves DLC, meanwhile, will net you an additional lord just for Mortal Empires, new units, variants and heroes.

One thing Creative Assembly isn’t ready to talk about is the next Total War. Three Kingdoms only came out last year, so I wouldn’t expect to hear about a core historical game for a while yet, but what about Warhammer? Warhammer 2 launched nearly three years ago, just over a year after the first game, but there’s not been any word on the final game in the series. So far, the team’s been content to expand Warhammer 2 and the Mortal Empires campaign with lots of DLC, and at this point it’s a pretty comprehensive game.

Creative Assembly notes that, not surprisingly, the coronavirus has complicated things, stopping it from announcing a new game, so we’ll have to wait a bit longer to find out what’s in store for the series.