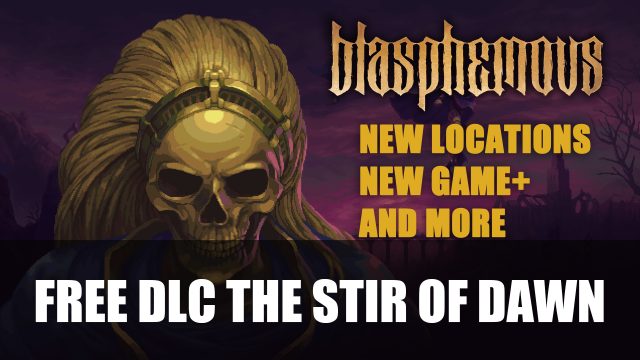 Developer The Game Kitchen announce a free DLC update which adds a ton of new content to the challenging metroidvania title called Blasphemous: The Stir of Dawn.

Developer The Game Kitchen behind the brutal metroidvania title Blasphemous have announced a free update will be coming to the game adding a bunch of content on August 4th. The DLC The Stir of Dawn sets to bring New Game+ mode, a brand new storyline and more bosses to fight against.

The update also adds a new penitence system that will give players a choice to make. Choose between three different options that provide different bonuses and debuffs on your character. You should put some thought into making this decision as it can greatly affect your playstyle. The system is purely optional though, so if you are looking for further ways to test your skills here’s some additional difficulty.

There is also a revamp of the maps systems, new items and number of balance changes. There is also an option coming with Spanish voice over now added to the list of VO.

Blasphemous follows the tale of The Penitent One, the only living survivor of the massacre of the Silent Sorrow. The game has punishing action with a number of brutal executions. There’s plenty of abilities and customisation to find your suited playstyle. The pixel art offers gruesome effects and highly detailed environments.

You can check out the DLC update trailer below, where at the end it looks like you can even pet the dog:

Blasphemous is available on Nintendo Switch, PC, Playstation 4 and Xbox One with the DLC The Stir of Dawn releasing August 4th.