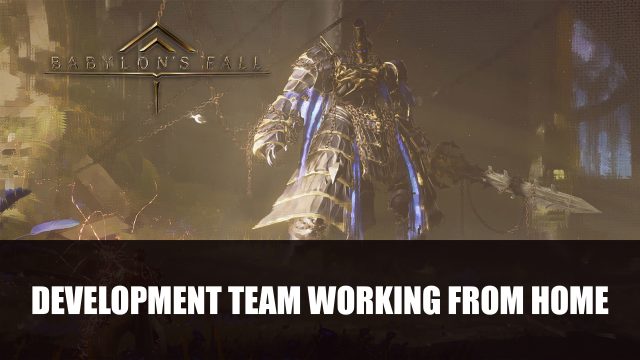 Developer Platinum Games has announced that the team working on Babylon’s Fall are now working from home.

The Action-RPG Babylon’s Fall was announced back in 2018, under developer Platinum Games. It was towards the end of last year when we got to see the first trailer release, and the team hinted more news would be coming this summer. Today, however the studio has shared a new message which postpones news of the action game.

The message shared by the official Babylon’s Fall twitter account shares that the game’s development will continue to be worked on from home, which is not to surprising as many studios have followed the same precautions. With this change in location has also caused a delay in news. The message states that “While we hoped to reveal more about the game this summer, we can share that development on Babylon’s Fall is continuing to progress well, with the team working safely from home.”

This means we most likely won’t be getting new details on the title for the time being. This isn’t the only team that has been affected by COVID-19 in terms of development as many games have been delayed including Cyberpunk 2077 which will now be releasing in November and Kingdoms of Amalur: Re-Reckoning getting delayed to September.

Last time we took at look at Babylon’s Fall was early this year, breaking down what we saw in the last trailer in our Babylon’s Fall First Look video/article. It showed promising gameplay with highly combat-focused action, mixing Nier: Automata with Devil May Cry styles.

This news also affects the possible release date for Babylon’s Fall which was likely to be expected for Q3 or Q4 of this year, which would coincide with Playstation 5’s release, but with the pandemic this may cause the game to be delayed.

If you want to know more about Babylon’s Fall be sure to drop by our Babylon’s Fall wiki. For more news be sure to read next Ghost Of Tsushima Trailer Inspired By Classic Japanese Cinema and New World Delayed To 2021.