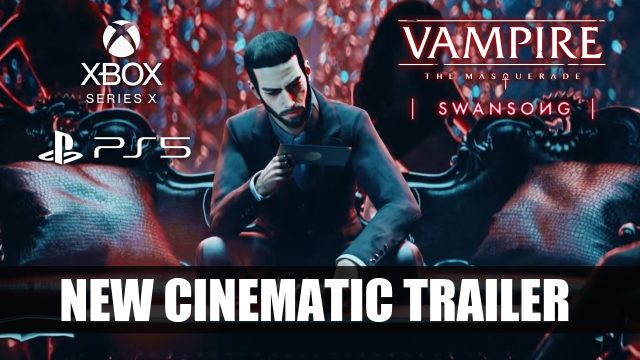 Developer Big Bad Wolf along with publisher Bigben have announced upcoming RPG Vampire: The Masquerade – Swansong will be coming to next generation platforms plus reveal a brand new trailer.

During the Nacon Connect event, a new story trailer was revealed for Vampire: The Masquerade – Swansong, showing more of the details and some the game’s characters. Swansong will feature three different vampires from three unique clans. Player decisions will impact outcomes in the game, and will also come with a number of consequences.

Swansong was announced last year at PDXCon, a narrative driven RPG set in the Vampire: The Masquerade universe. It is being developed by Big Bad Wolf who released titles such as The Council, an episodic story driven game with puzzles.

This isn’t the only title to be releasing in the same universe, there is Vampire The Masquerade: Bloodlines 2 which will be launching sometime this year, by developer Hardsuit Labs and Paradox Interactive. There is also Werewolf: The Apocalypse – Earthblood which also exists in the same tabletop universe the World of Darkness, also releasing in 2021.

The trailer shows a number of night scenes, vampires doing their thing, but also shows what appears to be some sort of murder by a gunman. Not much is clear on what is behind this sudden violence but shows an intriguing glimpse into the events of the game.

Previously Big Bad Wolf talked about the setting for Swansong, about “internal feuds” and “climate change” which could mean a blood feud between clans.

Vampire: The Masquerade – Swansong will be launching next year in 2021 for Playstation 4, Playstation 5, Xbox One, Xbox Series X, Switch and PC via Epic Games Store.

For more news you can find it here in Kingdoms Of Amalur: Re-Reckoning Delayed; New DLC Announced For 2021 and for more World of Darkness check out Werewolf: The Apocalypse – Earthblood Delayed To 2021. Curious what we could be seeing at the Xbox Games Showcase? Be sure to read Rumour: Elden Ring Details Leaked Before Xbox Games Showcase.