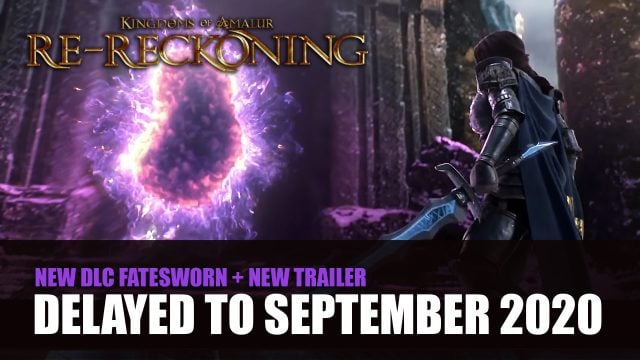 THQ Nordic has announced the remaster of Kingdom of Amalur will be delayed until September. They also share that new content will be releasing in 2021.

Kingdoms of Amalur: Re-Reckoning will be delayed to September 8th 2020, from it’s original August 18th release date. Pushing the launch a month most likely due to the current pandemic, which has affected a number of developers.

Along with this news comes a brand new cinematic trailer featuring the Fateless One, the main character players will take on. In the trailer it shows the one fighting a horse of Niskaru, a type of demon.

More news was also announced, THQ will be releasing downloadable content, the DLC Fatesworn will be releasing in 2021. Originally the game has a few DLCs which included two-story additions that introduced new dungeons plus areas for the player to discover.

Kingdoms of Amalur: Re-Reckoning will also include The Legend of Dead Kel and Teetch of Naros DLC, those with the addition of the new DLC will add further content for fans to enjoy.

The day of Re-Reckoning is coming!

Kingdoms of Amalur: Re-Reckoning is scheduled for release September 8th, 2020 on PC, PlayStation 4 and Xbox One, featuring stunning visuals, refined gameplay and all new content!

Fateless One, King of Ballades, Siege Breaker, Hero of Mel Senshir. Your journey will continue in 2021 with Fatesworn, a brand new expansion for Kingdoms of Amalur: Re-Reckoning.

As for what the new expansion Fatesworn will add, it could be an online multiplayer feature much like the Final Fantasy XV‘s expansion Comrades. Kingdoms of Amalur was originally suppose to carry on as a MMORPG, so this could be a way for THQ to add that component. There might even be PvP or addition of new classes or weapons. So far no exact time frame has been announced for Fatesworn, but new details should be released as we get closer to 2021.

Kingdoms of Amalur: Re-Reckoning will release on PC, Playstation 4 and Xbox One on September 8th 2020.

For more news check out next Greedfall Developer Spiders Announces Steelrising and Werewolf: The Apocalypse – Earthblood Delayed To 2021. You can also check out Rumour: Elden Ring Details Leaked Before Xbox Games Showcase.