The mobile fantasy battle RPG title from the mind of Yoko Taro known for NieR: Automata and Drakengard 3, SINoALICE has already reached a staggering 2 million in pre-registrations.

Upcoming mobile fantasy title SINoALICE, a mobile fantasy battle RPG from the mind of NieR creator Yoko Taro, is fast approaching its launch date of July 1st, now with already 2 million in pre-registrations. If you were wondering if there will be any crossovers with the NieR series, on July 16th will kick off events for NieR: Automata and NieR RepliCant.

You will see such iconic heroes as 2B and best boy 9S as they land in the world of SINoALICE, a dark a twisted world full of storybook fantasy. Face the amusement park boss Beauvoir (Simone) from NieR Automata, and use weapons from the game. But the crossovers don’t stop there as on August 6th will be the NieR RepliCant, featuring Young Nier, Kaine and Emil, introducing time-limited character classes with real-time combat.

SINoALICE pits storybook characters such as Sleeping Beauty and Red Riding Hood against foes with plenty of weapons at their disposal. The stories are reimagined with more a dark fantasy feel according to the envisioning of Yoko Taro. The mobile game is free-to-play with in-app purchases.

You can check out the trailer announcing the crossover events below: 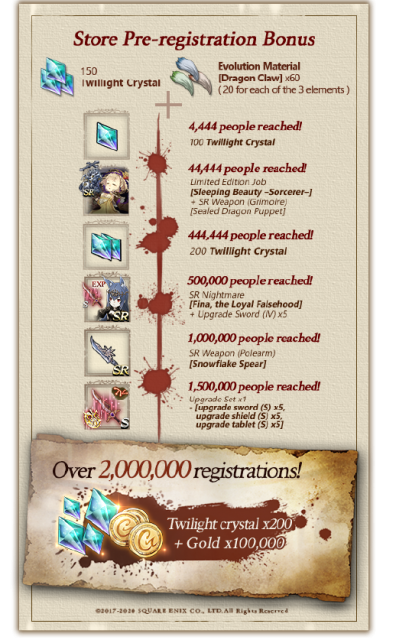 While I’m not a huge fan of mobile gaming this might be worth checking out as it is comes from the director Yoko Taro, and could be telling of how the upcoming NieR Reincarnation mobile game will look. This could be something to tie you over before that title comes out as well as the highly anticipated remaster NieR Replicant.

SINoALICE will be releasing on iOS and Android on July 1st, pre-registrations are open via the App Store and Google Play Store.

For more news be sure to read next Genshin Impact Final Closed Beta Starts July 2nd and Ghost Of Tsushima Has Gone Gold.