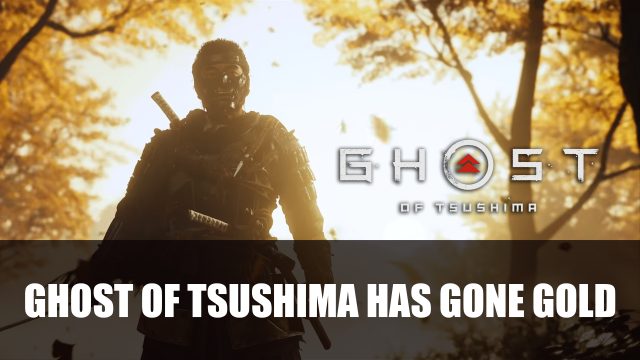 Ghost of Tsushima Has Gone Gold

Ghost of Tsushima has officially gone gold, meaning the game will be launching without a hitch on July 17th. This was announced by the official Sucker Punch Twitter account, who proudly shared that it’s ready to be shipped come launch day.

In the tweet, the developer shared an image consisting of the development team who worked on the title. At the moment most developers are working from home due to COVID-19, so this way of sharing the announcement was pretty fitting.

We’re thrilled to announce that #GhostOfTsushima has gone GOLD! This is the culmination of years of hard work from our team and we can’t wait to get it into your hands on July 17! pic.twitter.com/nidZvlqIIk

Ghost of Tsushima is an open-world samurai tale focuses on action-adventure, set in Japan in 1274, following the Mongol invasion. The story follows the feuding sides as warfare, chaos and violent change ensues. Players will follow the protagonist Jin Sakai, a warrior skilled in the art of the samurai in a tale of “revenge, empowerment, and hope”.

Ghost of Tsushima will be releasing on July 17th exclusively on Playstation 4 and later on Playstation 5. If you want to know more about the game be sure to check out our Ghost Of Tsushima: Gameplay First Impressions Analysis.

For more news be sure to read next Mixer To Close After Partnering With Facebook Gaming and Othercide A Turn-Based Horror RPG Gets July Launch Date.