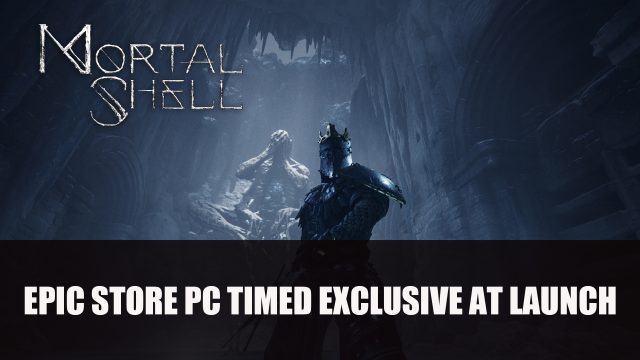 The upcoming souls-like Mortal Shell has been announced to be a timed Epic Games Store PC-exclusive.

Mortal Shell was featured during the PC Gaming Show over the weekend a new trailer was released for the upcoming close combat Action-RPG. Along with the trailer came news that the title will be coming to the Epic Games Store this year in Q3 (sometime between July and September) as a time-PC exclusive, available for $17.99. It will also being releasing at the same time on Playstation 4 and Xbox One.

The Steam launch for the game will be during Q3 2021 according to the developer Cold Symmetry. The reason for the decision is for financial support for indie studio, letting them continue to make great games:

The primary goals of our studio are to make Mortal Shell the best game it can be and to live another day and keep making awesome games in the future.

Epic’s financial support, for a small studio like ours, was clearly going to help us achieve those goals so it was something we had to consider earnestly.

The latest trailer features some one-on-one combat, facing the enemy Hadern, an early enemy where players have yet to possess a Shell. This means players will have to rely on their skill with a sword to strike down this foe:

At this early section in the game, the player has yet to possess a Shell with nothing to rely on aside from their instincts and skill with a sword. Here the game strips players to the basics with a pure test of swordplay: movement, timing, anticipation, distance, and committing your blade. The battleground is abstract, open, laced in mist and free from distraction. There are no excuses.

We got to have an interview with Cold Symmetry where we asked our burning questions, plus some of yours while checking out some gameplay. You can check out the VOD from the stream here. You can also check out the new class that unveiled recently known as Tiel.

Mortal Shell will be releasing in Q3 of 2020 on PC via Epic Games Store, PS4 and Xbox One. The closed beta will be taking place this July.

For more more Mortal Shell be sure to drop by the wiki. You can also check out next Mortal Shell Debuts Gameplay Footage Plus Closed Beta PC This July.