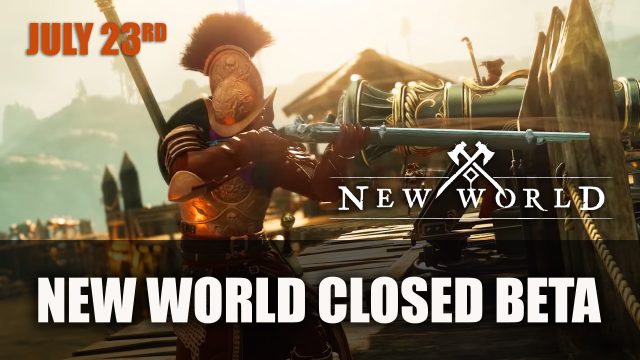 During the PC Gaming Show this week Amazon announced that their upcoming MMORPG New World would be coming to closed beta this July.

The colonial set online RPG New World will coming to closed beta on July 23rd. Amazon announces that sign-ups are now available on their official website. In a month’s time will be the launch of the title on August 25th. The news comes alongside a new trailer that features the game’s action combat which relies on a weapon based class system, with a number of weapons to choose from including bows, staves and more. In the trailer there is also a preview of the “opt-in” PVP system, where you will need to activate a flag in order to participate in PVP.

Previously Game Director Scot Lane explained that the real time combat system in New World is very skilled based, so if you’ve had experience with games such as Dark Souls, you’ll feel at home with taking on higher levelled enemies in New World.

New World is an Action-RPG all about the Age of Exploration, adding survival elements as players attempt to colonise Aeternum, a mysterious island. This MMO will have massive battles where up to 100 players can join, taking combat to the field. Join companies, build strongholds or go it alone in solo.

New World is now expected to release on PC on August 25th with closed beta taking place next month on July 23rd. For more on New World be sure to check out our Everything About New World, Amazon’s Atypical MMORPG.

For more news be sure to read next Torchlight III Now Available On PC Early Access and Baldur’s Gate 3 Early Access Planned For August 2020.