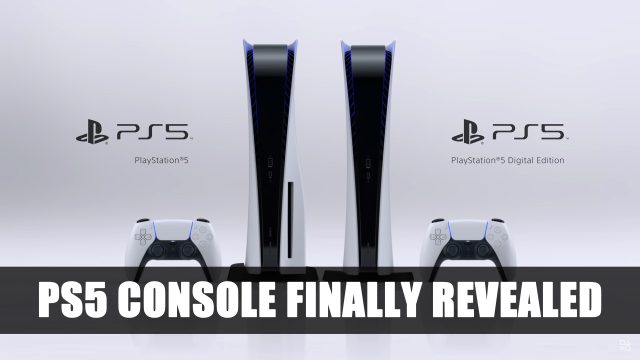 The PS5 event today came with a lot of news, but what is a reveal event without seeing the final console design? Well Sony finally unveiled their upcoming console which showed a new, more rounded design which comes in two different editions.

Sony revealed two different versions of the Playstation 5 today, one that comes with your normal disc drive, and the other a PS5 Digital Edition which is disc-less. Both editions of the PS5 will release in Holidays 2020. So far no exact launch date or price has been announced.

Your first look at the #PlayStation5. pic.twitter.com/VCDfmVKCEl

The new PS5 console has a pretty different look from previous models, going with a white outer book cover looking shell and the inner part in black. This matches the previous revealed Dualsense controller. Sony also revealed some further accessories all in the same colour aesthetic, including 3D audio headphones, media remote and new HD camera.

One noticeable difference between the normal and disc-less version, is the slight bulge when shown in side view for the disc drive. The Digital Edition looks a bit more streamlined in design as it’s missing this curve.

Some Twitter users have even created comparison images against the Xbox Series X, showing that PS5 is taller and a tad wider than that of the Microsoft console.

I’ve done this about 4 times and I’m getting similar results. pic.twitter.com/4lWxdhaoKq

That wasn’t the only news for PS5 today as Sony revealed some new games coming to the console which includes a remake of Demon’s Souls, all very exciting stuff.

Playstation 5 will be releasing in the holidays of 2020. What do you think of the design of the Playstation 5? Let us know in the comments below.

For more news revealed today be sure to check out Demon’s Souls Remake Announced which will be coming to PS5.