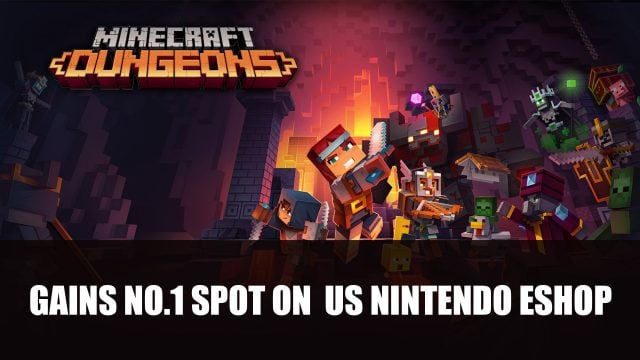 Gaining the number one spot on the Best Sellers page, Minecraft Dungeons is dominating the chart.

For a long time Animal Crossing has been the top spot for the best seller list on the Nintendo Switch eShop, but now a new number one has take its place and its name is Minecraft Dungeons.

The Action-RPG has now surpassed Animal Crossing which has been in the top spot since March, which is roughly 3 months of being in that spot. Minecraft is very well known franchise, which has now sold over 200 million copies for it’s sandbox crafting survival game. This also leads to the success of Minecraft Dungeons who has taken that universe and given it a dungeon crawler spin, making it the first standalone game set in the Minecraft world since the original game.

Recently Mojang has announced that there will be two upcoming DLC packs for Minecraft Dungeons, the first being Jungle Awakens releasing in July, and secondly Creeping Winters coming later this year. They are also working on cross-platform which is great news for Minecraft Dungeon players.

Animal Crossing New Horizons had been #1 since early March. That’s 3 months of dominance

As we are seeing on Xbox, Minecraft Dungeons is performing very strong, and is now #1 on Switch pic.twitter.com/JX5e01brN2

Minecraft Dungeons lets players go it alone in single-player mode, or team up with friends with up to four. Expect RPG elements with questing against the villainous Arch-Illager and plenty of treasure to discover.

Minecraft Dungeons is available on PS4, Nintendo Switch, Xbox One, Xbox Game Pass and PC. If you’re currently fighting against the Arch Illager be sure to drop by our Minecraft Dungeons wiki for weapons, armor, artifacts and more!

For a rundown of recent RPG news find it here in Top RPG News Of The Week: June 7th (Baldur’s Gate 3, Kingdoms Of Amalur, Path Of Exile And More!).