This week Kingdoms of Amalur got an announcement (or rather leaked announcement) that it would be getting a remaster called Re-Reckoning and now pre-orders for the collector’s edition is now available.

If you’re a fan of Kingdoms of Amalur, you won’t want to miss out on the pre-order for the collector’s edition of the remaster. Kingdoms of Amalur: Re-Reckoning will be releasing this August along with this swanky edition that includes a number of keepsake items.

The Kingdoms of Amalur: Re-Reckoning includes a 21cm tall statue of Dokkalfir rogue called Alyn Shir, a NPC in the fantasy RPG. It also includes the game’s soundtrack so you’ll never be without the tracks, a keychain with the Amalur logo, and a five piece set of postcard sized artwork. The collector’s edition also includes the game which I know sounds strange to mention but not all collector’s editions come with a physical copy.

The game has already been confirmed from listings that it will comes with all previously released DLC along with the remaster. This includes the original pre-order content, promo content such as the daggers for playing Mass Effect 3, plus the game’s post-launch premium DLC. This also means it will have The Legend of Dead Kel and the Teeth of Naros. 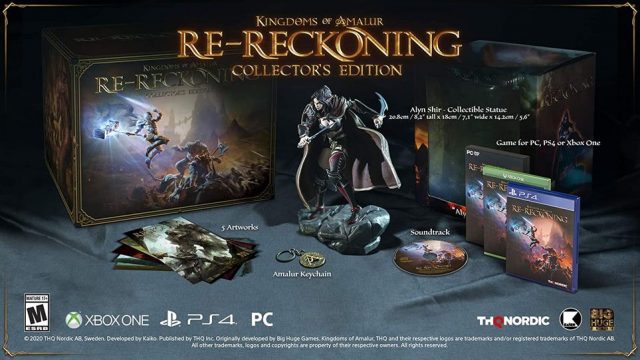 The retail price for the collector’s edition is set at $109.99 and the standard edition is available for pre-order for $39.99.

The game was revealed this week with a little confusion as the title just popped up listed on the Microsoft website without any fanfare, which later THQ Nordic confirmed was an “oopsy daisy” on their end, according to Florian Emmerich who spoke with Polygon. THQ Nordic acquired the rights to Kingdoms of Amalur IP back in 2018 and now remastering Reckoning.

You can also find some new images that have now appeared on Amazon listings:

Kingdoms of Amalur: Re-Reckoning will release on PC, Xbox One and PS4 on August 18th, 2020.

For more news be sure to read next Kingdoms Of Amalur: Reckoning Remaster Releasing In August and PC Gaming Show 2020 And Future Games Show 2020 Postponed. You may also be interested in Baldur’s Gate 3 Dev Teases More News Throughout June.