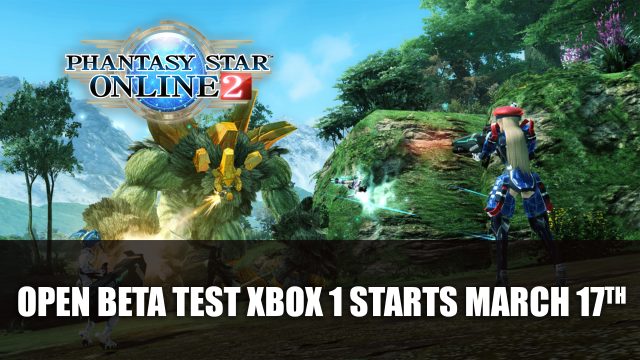 A major Japaneses free-to-play online action-RPG, Phantasy Star Online 2 published by Sega will be coming to Open Beta on Xbox One this March.

Publisher Sega and developer Online R&D have announced the arrival of an open-beta for one of the biggest online RPGs in Japan, Phantasy Star Online 2. On March 17th, Xbox One players will be able to join the Closed Beta for the free-to-play game.

Phantasy Star Online 2 puts players in the role of a member of ARKS, a task force designed to explore planets and defend the universe against the dangerous Falspawn. Phantasy will allow you to experience a variety of missions with multiplayer and take on battles with Action-RPG combat. The title is a free-to-play, where you can team up with up to 4 players in a party or explore multiparty areas with up to 12 players.

The online game sets to bring a host of customisation with four races to choose from and nine classes to master. You can also equip your character with a choice of weapons and skills, which will transform the way you play.

At the moment there is no announcement for open beta tests for further platforms, but PC versions are on scheduled for Spring 2020 according to this tweet.

Hi there, the PC version is still on target for release in Spring 2020. Our efforts are focused on the Xbox One Open Beta Test at the moment, we apologize for the inconvenience. Thank you for your patience, we are working on getting PC players some news as soon as possible.

For more news be sure to read next Fallout 76 Designers Exceed Budget For Wastelanders NPC Dialogue and Final Fantasy VII Remake Red XIII Is Not A Playable Character Plus New Visual Revealed.