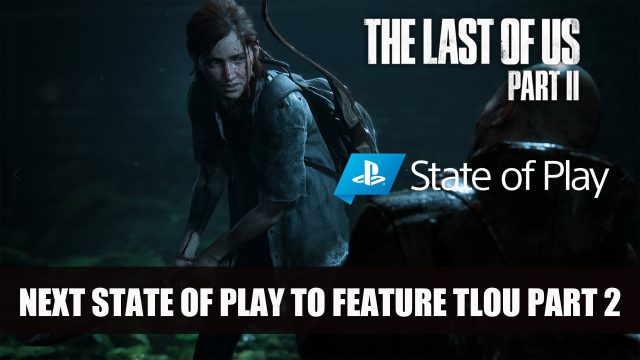 Sony Interactive Entertainment have announced the next State of Play will be taking place on May 27th and will focus on The Last of Us Part II.

The next State of Play will feature Naughty Dog’s upcoming sequel The Last of Us Part II on May 27th at 1:00 p.m. PT / 4:00 p.m. ET available to watch on Twitch and Youtube.

TLOU Part II will be releasing on Playstation 4 on June 19th, but ahead of that fans will get to preview some new gameplay footage and a deep dive into the story as well. On the Playstation Blog, Senior Director of SIE Content Communications shares that it will be roughly a 20 minute showcase with Naughty Dog Vice President and The Last of Us Part II Director Neil Druckmann.

If you were wondering if there will be any Playstation 5 news during this State of Play well there won’t be, as the post states there will be “no PS5 news or updates in this episode”, so it will purely focus on TLOU Part 2. There may still be some hope yet for Playstation 5 news, as there is a rumour that Sony may still hold an event as early as June 4th for PS5, but as we get closer we will have to wait as see.

State of Play’s next episode is dedicated to The Last of Us Part II: https://t.co/tb7W3Mq4OS

Tune in Wednesday at 1pm Pacific time for a deep dive and a new gameplay sequence pic.twitter.com/U9MeRec54e

The Last of Us Part II will release on Playstation 4 on June 19th. If you want to catch up on Ellie’s adventure before the sequel releases, don’t miss out on the Days of Play 2020 as The Last of Us will be available for $29.99.

For more news be sure to read next Final Fantasy XIV Starter Edition Free On PS4 Until May 26th and Playstation Days Of Play 2020 Deals Will Start Early June.