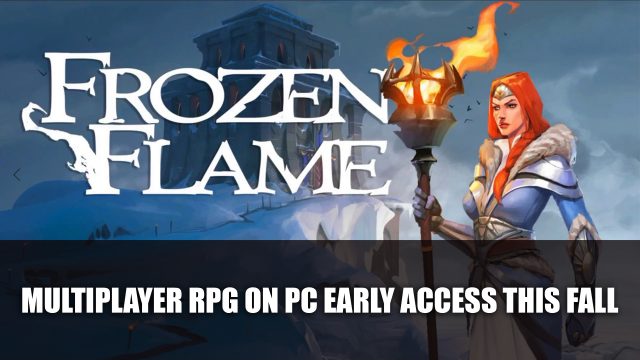 Dreamside Interactive have announced they will be releasing the Fig-funded multiplayer survival action-RPG Frozen Flame for PC on Steam Early Access.

Frozen Flame the multiplayer Action-RPG was funded on Fig, and has been announced by the developer Dreamside Interactive, that it will coming to Steam Early Access with the minimum price point of $29. The title sets to have a deep RPG experience, where players will defeat epic bosses and various ferocious monsters with fast-paced combat. There is also flexible crafting and leveling systems which the developer explains will offer great replayability.

The story surrounds The Flame, a source of great magical power that will help develop your character’s powerful abilities. Endgame will include building entire settlements, taming wild creatures as well as exploring new lands and dungeons.

The main game mode is called Cataclysm where survival is not the only goal, the world needs saving from the destruction at hand. What’s interesting is that there is only partial saves after each game cycle, which will bring players closer to the final boss. There will be additional game modes and worlds in future updates.

The artstyle kind of looks a bit like the monster hunter Dauntless mixed in with some Fornite survival building, but has it’s own flavour of story and fantasy. Will be interesting to see more of this open-world multiplayer, and how it shapes up in early access.

You can check out the official features below and the latest gameplay video:

Frozen Flame will be coming to Steam Early Access this fall.

For more news and features find it here in Scarlet Nexus First Impressions: Next-Gen Code Vein? Sign Me Up! as well as Phantasy Star Online 2 Launches On PC On May 27th.