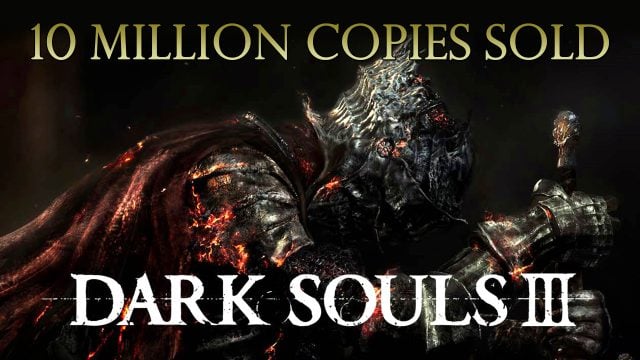 Celebrating a major milestone the official Dark Souls twitter account shares that Dark Souls 3 has now sold an amazing 10 million units worldwide. Dark Souls III is the latest entry in souls titles by FromSoftware. Since then From has also released the action-adventure title Sekiro: Shadow’s Die Twice and are now working on the elusive Elden Ring in collaboration with A Song of Ice and Fire writer G.R.R. Martin.

Dark Souls III first made its debut in March 2016 in Japan and then worldwide in April, selling 3 million units within the first month of its launch. The dark fantasy title that pits players against the most menacing bosses with plenty of Action-RPG combat. After 4 years since its release it now has sold 10 million copies worldwide. The Dark Souls series has also now cumulatively surpassed 27 million in sales, only supporting they have created a formidable IP.

As for what the future brings, we’re hoping to see more of Elden Ring which has yet to show any gameplay, but From still remains tight lipped. Hopefully we will see more in the coming month during Summer Game Fest.

If you’re currently making your way through the dark universe of Lothric or picking the game for the first time, be sure to drop by out Dark Souls III wiki. Dark Souls III is available to play on Playstation 4, Xbox One and PC.

For more news be sure to read next Wasteland 3 Dev Diary Features Character Creation, Combat And More and Wolcen: Lords Of Mayhem Roadmap And First League. Don’t forget to stop by the Dark Souls III wiki for any help needed with the game.