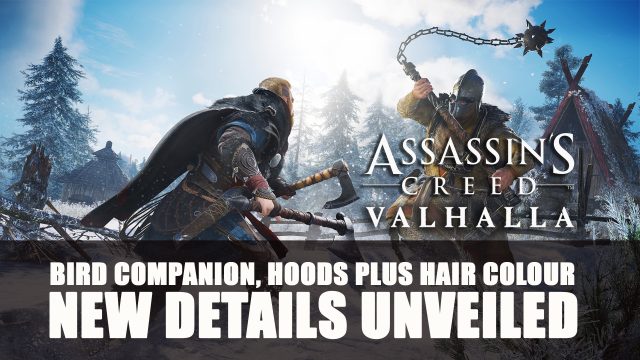 New details were announced for Assassin’s Creed Valhalla this week which include more information about the bird companion we saw in the gameplay trailer, plus hoods and hair colour changes.

New information has been shared about the bird companion that will be accompanying you in Assassin’s Creed Valhalla. The bird is called Synin, pronounced “Sue-nin” which has a similar meaning to the word “insight” in Old Norse. Considering the bird will act to in similar way to the eagle in Odyssey, insight is quite a fitting name, as it will be able to show you views overhead.

There were also new details about character visual customisation, for the first time in the Assassin’s Creed series you will be able to change the main character’s hair colour. This detail was announced in the Washington Post livestream which interviewed Valhalla creative director Ashraf Ismail. Along with hair colour is the option for different hair styles and beard styles if you choose to play Eivor as male.

Bringing back the hood from Origins, you will be able to pull your Assassin hood up or down, but in Valhalla you won’t need to access the game’s menu in order to do so. Other previously announced character cosmetic customisations include tattoos and war paint.

We wanted as close a meaning to “insight” in Old Norse 🧐 pic.twitter.com/2sM7MnOYx1

You can check out the full hour long livestream below:

Recently news of the season pass will unlock a specific quest quest surrounding the legendary Beowulf.