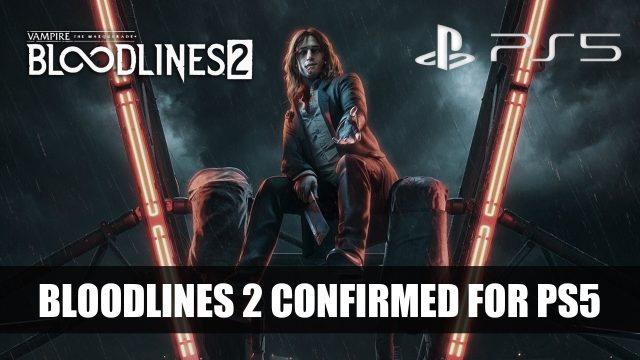 Publiser Paradox Interactive and devleoper Hardsuits Labs confirm that upcoming Vampire: The Masquerade – Bloodlines 2, will be coming to Playstation 5.

Earlier this week, Microsoft announced a number of games coming to their next-gen console Xbox Series X, which included Vampire The Masquerade: Bloodlines 2. Paradox Interactive and developer Hardsuits Labs now confirm that Playstation 5 will also be a platform available for Bloodlines 2.

Previously platforms that had been confirmed were PS4, Xbox One and PC, but this week adds both PS5 and Xbox Series X to the list. A new trailer was also premiered during Inside Xbox which shows more of the dark world with a side of humour.

Vampire The Masquerade: Bloodlines 2 is an action-RPG set in the city of Seattle years after the events of the prequel. It is also based on the table top universe of the same name. Bloodlines 2 will follow the story of a young vampire after being  turned, awakening to a world  where various vampire clans are met with political factions, all fighting for the control of the city. The gameplay takes on stealth and first-person combat which includes some supernatural vampire powers.

In case you missed it, check out the latest trailer below:

Vampire: The Masquerade – Bloodlines 2 will be coming to Xbox Series X, Xbox One, PC via Paradox Store, Steam, GOG, Epic, Playstation 4 as well as Playstation 5, sometime in 2020.

Eager to see more Bloodlines 2? Be sure to check out our Vampire The Masquerade Bloodlines 2 Preview: Spectral Street Cred In Seattle which covers gameplay, narrative and more.