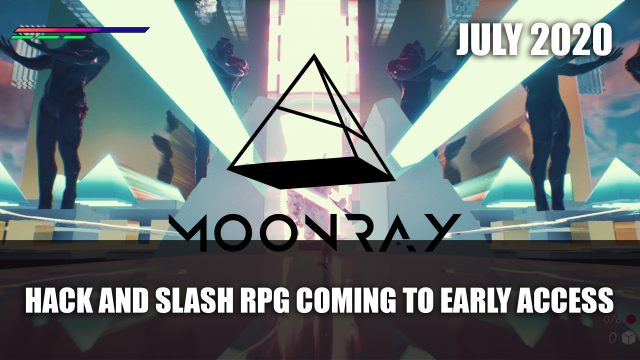 Developer Everything is Full of Gods behind the upcoming surreal souls-like action-RPG Moonray announces it will be coming to early access this July 2020.

Moonray is a hack and slash RPG which draws inspiration from souls titles, but is set in a rather surreal setting. The game will be coming to Steam Early Access on July 2nd 2020, and will be coming to next-gen consoles at a later date.

The story follows a weakened goddess who chooses to resurrect her protector to put a stop to a deadly cult, that’s on the war path to destroy her. Players will explore a dream-like (or nightmarish depending how you look at it) landscape, which is detailed with AAA-quality shaders and renderings built with Unreal Engine. The trailer shows some of the gameplay, the environment kind of looks like an abstract modern art piece that’s come to life.

The title sets to combine both light and heavy melee attacks with hyperblaster shots which you can use against these haunting enemies. Use a perfect block strike to send enemies flying and carry out your next move. Slaying these enemies will grow the goddess’ powers.

We’ve seen our share of souls-like indies titles from Sinner: Sacrifice for Redemption to more sci-fi tastes with upcoming Hellpoint. But this looks to have a whole new surreal fantasy world, which looks quite trippy.

Moonray will be joining Steam Early Access on July 2nd, with next-gen console versions arriving at a later date.

For more news be sure to read next Rumour: Elden Ring At Xbox Series X Games Reveal Event and Pathfinder: Wrath Of The Righteous Closed Alpha Testing Now Available. You can also check out Darkborn Development On Hold But Dev Working On Something New.